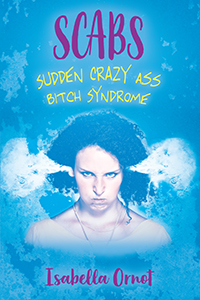 Humorous, Edgy and Full of Family Dysfunction and Mystery

Growing up in the shadow of their mother’s alcoholism, Angie and Jan witnessed frequent volatile outbursts. They coined the term SCABS (Sudden Crazy Ass Bitch Syndrome) to define it, but they feared that someday they would be like their mother. Together they vowed to walk a different path. Angie emerged as a strong aggressive journalist who strode into the world while Jan was timid and ran from confrontation. Angie’s best friend, Gloria, is an award winning investigative reporter who disappears while researching a real estate fraud case. When she fails to show up at her high school class reunion, Angie is determined to find her. As the two sisters embark on an often humorous search, they encounter a violent bondsman, a scam artist, a murderer for hire, and a Meth manufacturer. As Jan has repeated Scab outbursts, she finds she is more like her mother than she realized. As the mystery around Gloria evolves, the bonds that tie the sisters together will either help them or break. Noah is a sexy ex-Navy Seal turned vigilante with a tendency for murder followed by hot sex. After a chance encounter with Jan, he inserts himself into her life. When she wakes up naked in bed with Noah, Jan can’t remember what happened. She suddenly finds she is in a fight for her life.

Isabella Ornot was raised in an Italian family that was full of love, passion and plenty of dysfunction. Her first novel is a humorous take on her upbringing combined with a thrilling mystery. She currently lives in Upstate New York with the love of her life and her voice of reason.