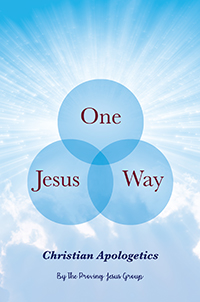 Out of many paths, Jesus is the one

The challenge to defend God’s Word can at times seem overwhelming, because only our faith exists as evidence which we are not able to see. Learning from experience is the only way to defend God’s Word. The theoretical aspect of it is either self-taught or an institution teaching the subject. Either way is unavoidable. In my study of the Old Testament, I get the idea that only one kingdom was needed to govern the nation of Israel. I believe God’s desire was to have 12 tribes in his nation, and he sent his Son to accomplish this task in Israel. The house for the church Jesus builds of which Emmanuel is the one and only king consists of twelve tribes. Being a member of this church means we live Christ like and such a life is the way wherein his laws are written within us. Observe the fact that we live by a new covenant and its laws I believe were received by John in the Isle of Patmos. There I learned “the rule with a rod of iron” to keep my faith in Christ Jesus.

In this deceptive world, choosing the way for life eternal is certainly a challenge. Witness the mercy of God because God has designed for us a way to overcome the challenges. In discovering the way made by God...

Formation of the group is from the fact that Jesus says he would build his church. We must practice that which we have learned in the body of Christ Jesus to prove him. Since we all bear this burden, rather than the “pot calling the kettle black”, do the first work which is to examine and transform oneself in the image of Emmanuel. The image of Emmanuel is to prove him.