A Conspiracy of Jewish Proportions 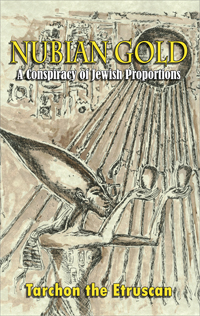 A Conspiracy of Jewish Proportions

Follow the paths of two men as the find their destinies. . .

In ancient Mesopotamia, two people parted company on their way out of Ur.

One is on the run and in search of a land to call his own. His people would later make common cause with other fugitives to form an organization with a long tradition of learning, trade routes and commerce. The other upholds the freedom that his ancestors, the hunters-gatherers enjoyed and reminisces about the events narrated in this book.

Finally the "true" history of the Jewish people and of their holy scriptures has been told.

In spite of the popularity and Sarah's well known expertise, Shamash was able to incite the crowds of city folks with a double allure. To the pious and family oriented citizenry he painted a picture of sin, drunken orgies, cavorting and dancing with women of ill repute so close to the temple (Shamash's House of Pleasures was behind the temple). Moreover he pointed out the sacrilegious commerce in the gods graven images in Terah's shop. The gods' blessings would be upon all who took and delivered such blasphemous objects to the Bright Temple. A clever move to increase the temple endowment and its Gift Shop! To the secular and fun oriented citizenry he promised free drinks and free sex (in that order) to anyone who would bring a piece of Abraham's establishment in order to tear it all down (a wise move so he could also end up in possession of Sarah's renowned sex toy inventions and inventory).


One day while going about his daily quest for food and water, our hominid found himself on a hillock at the moment when lightning struck a patch of dry grasses and some sticks. Fire always brings fear to all living creatures and at first he cringed in terror but curiosity got the best of him when the fire quickly died out. He approached the burnt site cautiously and upon picking up a piece of the smoldering embers, fire on the stick started up again by virtue of air passing over it on the upward motion. He held the stick up for a while and then he dropped it to the ground where once again the fire expired. This experience emboldened him. Using time-lapse narrative he learned that fire can be started and stopped. That fire can be held as long as some insulating distance from it is present. That friction as heat can start fires and so do flint sparks. That air when fanning a fire stokes it. By selecting the right kind of wood sticks, fire could be maintained for long periods of time and better still fire could be in this manner transported.


Tarchon's quip. To find where the Garden of Eden is, one has to look for a group of Cherubim (Cherubs? Cherubim is already a Hebrew plural form) and a flaming sword which turns every way. YHWH has never removed those guardians of the Tree of Life that stood in the middle of the Garden of Eden as far as the Hebrew Bible is concerned. Happy discovery!

"Nubian Gold - A Conspiracy of Jewish Proportions" by Tarchon the Etruscan is a walk through history in the shoes of an Etruscan observer exposing along the way the exploits and vicissitudes of the Jewish people, giving credit where credit is due.
The author, a non linear thinker yet a brilliant conversationalist, has a light and humorous touch but takes no prisoners.
Data and facts are presented putting pieces together that were just out there, waiting to be related. Events speak for themselves but the author doesn't follow-up on all of them leaving readers to reflect and draw conclusions on their own.
The author exposes the truth about the Jewish people and their holy scriptures without malice in the fashion of the fable "The Emperor's New Suit".
Abraham, Sarah, Akhenaten, Esther, Daniel, the Septuagint, Martin Luther, William Tyndale and some notable rabbis all come alive in Tarchon the Etruscan's Nubian Gold.
Above all, it is an immensely readable book. The zingers that the author calls "zings" are priceless.

Tarchon the Etruscan is a student of the human condition, wielding the written craft to enrapture the mind much like an artist wields a brush. The pages are a blank canvas on which to draw from a talent heralded by many and matched only by an imagination that rises to the task. Nubian Gold is the reminiscences of a seer's vision.