An Eyewitness to the Holocaust 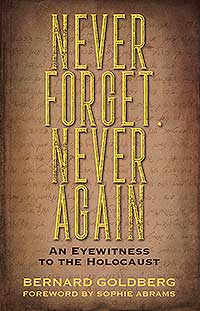 An Eyewitness to the Holocaust

“If you told me what I myself have seen, I would not believe you.” – Bernard Goldberg

Bernard Goldberg often said, “if you told me what I myself have seen, I would not believe you.” This is true of many Holocaust eyewitness accounts. Every survivor has a story and no two stories are alike. As time has taken more survivors and first-hand accounts of their experiences and survival, Bernard’s great-granddaughter wanted to publish his story. In an effort to humanize the names and faces of people she never met and to educate her generation so history does not repeat itself in a climate of growing tensions, Sophie Abrams edited and published Bernard Goldberg’s memoir.

Bernard Goldberg was born in Kaliscz, Poland in 1912. He served in the Polish Army at the beginning of World War II and then survived the Lodz Ghetto and the Holocaust in which he lost his first wife, a son, his parents and his sisters. He began a new life when he met Luba, herself a Romanian Holocaust Survivor, in a post-war refugee camp. In a true story of love at first sight, they married ten days after being introduced. Together they went to Israel in 1948 to start their new lives and their family. Bernard served in the Israeli Defense Forces in the 1948 War of Independence and again in the 1956 Suez Conflict. In 1959, he and his family moved to Columbia, South Carolina, to join family already there. A leader of Columbia’s small Jewish community, The Goldbergs were instrumental in creating Columbia’s Holocaust Memorial in honor of those South Carolina residents who were survivors and those who were U.S. Army liberators. Concerned that the world, and even his own descendants, would forget the unimaginable horrors of the Holocaust, he committed his bitter memories, with great difficulty, to writing.