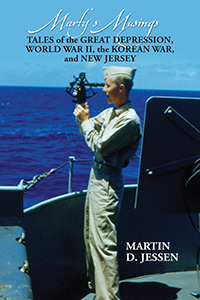 From the foreword by: James J. Florio, 49th Governor of New Jersey & Lieutenant Commander USNR (Retired): “Marty is a deep and thoughtful observer of the human condition…someone with an observant eye for detail, with perceptive insights into everyday actions and events that are at the same time commonsensical and profound. It is clear that service in the Navy was for him, as it was for me, a major life-shaping force. Marty’s insights into the virtues and follies of military life are delightful! The military bureaucratic foolishness that some of his tales highlight can be humorous or tragic, depending on the circumstances. Marty’s stories about his business career offer us a picture as to how traits we all purport to hold in high esteem are still valued. Common sense, plain direct speaking, honest bargaining—all flow as virtues embedded in the pages of this book. In an age of business speculations and clever sharpsters, this book should be required reading. This book represents his views and values which reflect our hope that Metuchen, New Jersey, and America, even while experiencing the inevitable changes that the future holds for us, remain committed to the fundamental principles that Marty has shared with us in this delightful read…” www.martysmusings.us

Marty has always been a storyteller. He likes to make people laugh! This collection of 168 short stories cover: growing up poor during the Great Depression, serving as a quartermaster aboard a destroyer escort during World War II, college at Rutgers University, being an officer aboard two rescue salvage ships during the Korean War, and stories about living and working in New Jersey. Here's one called "THE MISSION": During World War II, I was once on a Philippine Island called Samar awaiting assignment to a ship or permanent island duty. I was given temporary quarters in a pyramid tent at Navy Base #3149 on the edge of a coral airstrip, adjacent to the jungle in Guiuan, Samar. The United State Navy always keeps you working, so I was assigned the job of jeep driver to a legal officer. I was a "go for"; go for this, go for that, while I awaited assignment. In my travels I noticed that every morning at 1000 hours (ten o'clock in the morning), an Army Air Force P-38 fighter plane took off. I visualized it strafing Japanese position, shooting down Japanese Zeros, or perhaps on a vital photo reconnaissance mission. One day I had to pick up some paperwork from the airfield control tower, so I asked, "What mission is in store for the P-38 today?" The response was, "Oh! That is the daily flight to freeze the ice cream for the officers' club."

Marty's Musings: Tales of the Great Depression, World War II, the Korean War, and New Jersey is a collection of 168 short stories written by 85-year-old Martin D. Jessen. A lifelong storyteller, Marty grew up poor (like most people) in the small town of Metuchen, New Jersey during the Great Depression. At the age of 17, he enlisted in the United States Naval Reserve and served as a quartermaster aboard the destroyer escort USS ALBERT T. HARRIS (DE-447). Marty attended Rutgers University thanks to the G.I. Bill and graduated with a Bachelor of Science degree in civil engineering. With the outbreak of the Korean War, Ensign Jessen was called up by the Navy as a reservist in January 1951. He graduated from the United States Naval Salvage School, Bayonne, New Jersey, as a qualified diver to 150 feet. He then served as the diving and salvage officer aboard the rescue salvage ships the USS CONSERVER (ARS-39) and USS CURRENT (ARS-22). In civilian life, Marty owned and operated an excavating business, Arnolt Bros, Inc.; The Diligent Diggers of Dignified Dirt! He still works today as president of Victorian Office Rentals, Inc. and continues to write more Marty's Musings!