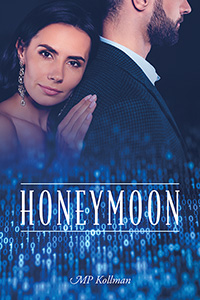 A honeymoon in Reno—what could possibly go wrong?

A honeymoon in Reno! What could possibly go wrong?

However, back in Jaspar, Margaret Addams, preparing to leave home to visit Elizabeth and Emery Grayson, is catapulted twenty feet down the sidewalk by the explosion that destroys her house. She is barely holding onto life, but what has she to live for? Jerome, a young man she had grown to love as a son—a murderer—is dead, and her husband—no better than a common criminal—is imprisoned a hundred miles away.

And then, there’s the Hamiltons. Ivy—a woman Sandy thought he had put in prison seven years ago—has found her estranged husband Martin, and their daughter, Azalea—owners of MHE in Reno, a company that provides data entry services for its clients using its powerful server.

Questions need answering. Why is Ivy in Reno and not in prison? What does she want with Sandy’s boss, Jeff Hand? How did the Hamiltons anticipate Sandy and Samantha’s arrival in Reno? What is the source of the hundreds of thousands of dollars accumulating in an account that has no connection to their business?

4:15 AM PST – Reno NV
After more than half an hour of staring at the monitor since Martin and Zale had left, Ivy Hamilton emitted a surprised gasp when, from the airport, Mr. and Mrs. Kevin Grayson reserved a room at the Reno Remington. So, Jeff hadn’t sent him. Mrs. Kevin Grayson. Pain slashed across her heart. Though, over the years, she had never tried to fool herself about the possibility of a relationship between them, some part of her took this marriage as a personal affront, coming as it did here and now.
“Why Reno? Of all the places in the world, why here?” Her hand touched the name on the screen, caressed it, as she would have his face—so young, so earnest.
Her thoughts tripped back to the conversation between her daughter and husband before they left for the airport – shortly after an alarm blasted them all awake.

. . . “When is his plane due?” Martin had anxiously leaned over Azalea’s shoulder.
“Half an hour. Just enough time for us to get to the airport. Make sure it is him.”
“It has to be. With Ivy missing, you know Hand would send a search party for her. Though I can’t believe he has the gall to send him, of all people.” Martin cast his wife a disparaging glare. “But then, who better to rescue you than your lover.”
Ivy focused totally on the screen, frowning as she noted the origin of the flight: Jaspar, Wisconsin—Kevin Grayson’s hometown, according to the government file. It had to be a coincidence. Jeff would never send Randy—Kevin, she corrected herself—Kevin Grayson to find her. Furthermore, he probably would have refused the assignment. He had sent her to jail and no longer cared what happened to her. The private plane’s manifest had listed two passengers: K. Grayson and S. Greene. Thousands of K. Graysons in the world. It couldn’t be him. It might be a distant cousin, also with the initial “K,” but not him.
“You won’t touch anything, will you?” Azalea chuckled as she swept through the doorway; however, the sneer belied her laugh. Ivy’s gaze dropped ruefully, her throat constricting with unshed tears.
She had spent an entire day locked in this room, the base of their illegal, highly profitable operations. Had she not seen the hard copy files before Martin destroyed them, Ivy wouldn’t have a clue what her husband and daughter were involved in. She still only grasped part of it. All the money in the account she had been sent to investigate seemed to have something to do with local hotels. Now, this machine stood between her and the information. And Ivy lacked the knowledge to retrieve it.
Or to use the machine to get her out of this drab room...
After they left for the airport, Ivy moved to the chair Azalea had vacated. Her daughter had programmed this computer to magically open and close the door separating Ivy from freedom. Several keys needed to be pressed. But which ones? And in what order?
How had she become so adept with computers? Of course, Ivy still thought of a fourteen-year-old Azalea. “Oh, Azalea, I never meant to hurt you.”

Martin had shoved Ivy through the doorway to their apartment. Alarmed by the commotion, Azalea quickly emerged from another room. “What the…?” Her gaze locked with Ivy’s, but her eyes, narrowed in disdain, quickly squelched any hope for a joyful reunion. “What’s she doing here?” she demanded furiously.
“I caught her looking through the office desk.” Zale—her beautiful daughter—all grown up. But anger, the same anger she had displayed seven years ago, marked her features. Her vibrant emerald eyes flashed with accusations, pain, and contempt. And hatred. Even more so than seven years ago. And there was absolutely nothing Ivy could say or do now to rectify the situation. Her own daughter was still disgusted by her. A hatred and disgust Martin had obviously done nothing to dispel over the years.
“Not even gonna try to deny it, Ivy?” Ivy. Not ‘Mom’ or even ‘Mother.’ Ivy felt her heart breaking. “I can’t believe they let you out so soon! I thought drug dealers got longer sentences these days.”
Confused, Ivy glanced at Martin. His smug expression said it all: He had led Azalea to believe she had been the drug dealer, leaving himself blameless. To deny the allegation at this point would be futile. She lifted her chin resolutely. “They didn’t have enough evidence to convict me.”
“What are we gonna do with her, Dad?”
“Right now, we’ll lock her in the computer room. Tomorrow, we’ll decide how to get rid of her.” Get rid of her
left little to the imagination. How
was the question . . .

Sounds of movement in the outer room surprised Ivy and she glanced at the clock on the sterile wall above the computer: 4:30. Surely Martin and Azalea hadn’t yet returned. Ivy crossed the room, pressed her ear to the door and, listening carefully, heard a vacuum cleaner. The housekeeper, Rosa, Ivy had heard her daughter call her. She quietly returned to the desk. If Rosa didn’t know the combination to open this door, contacting the woman would only hurt her.
Azalea’s treatment of the housekeeper appalled Ivy. From the bits of argument she had overheard, when Rosa requested time off to tend to her seriously ill mother, Azalea flatly refused. Mothers were expendable. Ivy could only blame herself for the attitude. However, Martin had fostered it. So, apparently, Rosa had taken to working odd hours to allot as much time as possible for her mother’s care.
Ivy frowned at the computer. Fate had brought Randy—Kevin—here, and she had no way to contact him. Had he changed? Martin was wrong, she knew. Had he only been using her seven years ago, Randy—Kevin
—would never have been so enraged when she explained that Martin knew he was a federal agent. She cringed at the memory of his quiet rage and struggled to focus on something—anything—else.
She picked up a piece of paper and smiled wistfully. Two things her daughter had inherited from her: her emerald eyes and… The idea caught as she glanced toward the door. Then she removed two sheets of business stationery and an envelope from the desk drawer.

Comparing the note to her daughter’s handwriting, she smiled; hurriedly scribbled a note to Kevin, which she slid into the envelope and slipped both under the door, leaving a tiny corner showing in the computer room.

Honeymoon is the third in a series by MP Kollman—Brothers published in 1995 and Sequela in 2012. MP also published Skin Deep, which is not part of the series, in 2016. MP began writing in grade school for her own enjoyment—taking her on adventures and away from the family farm. MP retired several years ago and can now devote more time to writing. 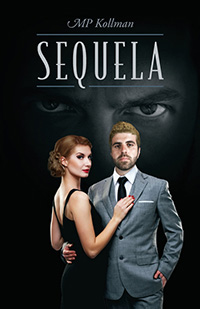