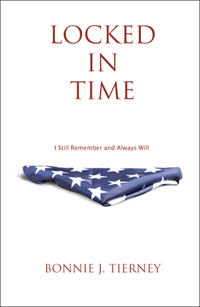 THE SILENT AND DEADLY COST OF WAR

A person with Post-Traumatic Stress Disorder (PTSD) will grasp onto anything or anyone to keep them alive, to keep them feeling good, to take away the pain, to feel anything about themselves inside.”

On October 23, 1983, 241 soldiers were killed in their sleep during the bombing of the Marine barracks in Beirut, Lebanon. For almost 30 days, Lieutenant Bonnie J. (Caceres) Tierney was the Mass Casualty Officer at Rhein Main Air Base in Frankfurt, Germany, assigned to help identify and process the body parts. Day after day, she did her duty, while trying to detach from the horror of it all.

Her first thoughts of suicide began while she was stationed in Germany.

What followed was more than 20 years of depression, isolation, nightmares, panic attacks and reckless behavior, until she finally sought professional help. She was diagnosed with Post-Traumatic Stress Disorder, a condition that plagues our servicemen and servicewomen who have witnessed the unspeakable.

This is Bonnie’s poignant story.

Gold Star Moms Information Please take time to consider a donation to their cause.

I’ve heard it said that more Vietnam Veterans committed suicide than died in the Vietnam War. PTSD really takes control of your mind if you let it…and the problem is, you can’t help it sometimes.

Day after day we moved body parts from one bag to another. I remember one particular day I was helping a young airman pick up a body bag. He was standing at the top of the bag, let’s just say north and I was standing south, and in between we held the remains of soldiers. The bag wasn’t completely zipped and a leg fell out and off into my hands. I caught it before it hit the ground and liquid was oozing out and then I saw maggots eating the leg. My fingers went inside his leg, and it reminded me of the days on the farm when I would pick “rotten tomatoes” and my fingers would get tangled in the vines and I would pick a rotten tomato. The smell was so bad I would often wash my hands in the field with a good tomato to take away the stench. The stench was horrible. Nothing could be worse than smelling decayed bodies, not just one body, but hundreds of decayed body parts. To this day, I have a hard time swallowing as I think about what I saw during that month. I remember the smell like it was yesterday. The smell remains with you in your nostrils forever…it’s unimaginable really. I faintly remember the people with whom I worked but I remember being horrified by what I saw when we uncovered all the remains of the later identified 241 Marines.

Imagine walking into a circus tent and seeing hundreds and hundreds of body bags lying on the floor. That’s exactly what it reminded me of…a circus tent. Day after day the doctors worked to identify the soldiers. We transported bodies to the medical tables and transported them back to refrigeration trucks. We placed tags on those who were identified, cleaned the body parts from the sand and debris and placed their remains in stainless coffins, bright shiny coffins. One by one, they were moved to different sections in the tent. Then the doctors would find the remains of a person who was already identified and we would return those parts to the coffins. It was some sight to behold.
I can’t quite remember how many days into the identification and processing of the Marines that I experienced a detachment of my body but it might have been, as best as I can remember, about a week after we started identifying the bodies. Up until then, I kept telling myself this was my duty as an officer of the United States Air Force and as a member of the military, it was my duty to return these soldiers home with the same dignity to which they served. I kept seeing body parts one after another. I’d see a head, then a face with half a head, then brains, arms, legs, fingers, and headless men. At one point early on, I remember standing in the middle of the tent and speaking to an older Senior Master Sergeant. I said something to the effect, “My God, never let it be said that black men didn’t serve their country well,” and the Sergeant looked at me and said very quietly, “Lieutenant, those are not black men. They are decayed bodies!” It hit me right then and there; they were decayed bodies - dead Marines who died senselessly in their sleep. The Sergeant continued as we both stood and stared across the tent, he said, “I was in Vietnam, and I never saw anything like this.” I looked at him and I wanted to puke my guts up; but I couldn’t do it. It’s as if everything inside me wanted to come out, but I just held it in. I had to be strong for him now. As I looked again at the Sergeant, I saw tears rolling down his face and he turned from me and wiped his eyes. I’ll never forget seeing him, standing there next to me, educating me as most senior NCOs educated their young Lieutenants. I couldn’t imagine anything being worse than Vietnam, but then I was never there. I couldn’t imagine him having to bear yet another burden in his military career. I just reached over and put my right arm around his shoulder and said, “I’m lucky to have you by my side, Sergeant. Thank you for your sacrifice to our country.” He wanted to forget Vietnam I’m sure, but right in front of him was Vietnam all over again. How he made it through the day, I’ll never know. I guess feeling the warmth of my hand to comfort him in his sorrow gave him strength. There were times to be tough but there were also times to say nothing – just offer a nod, a shoulder to cry on and a sympathetic ear. The greatest asset an officer has is the ability to listen.

There was a point in the identification process where it suddenly hit me again, that I was helping to identify the Marines killed in the tragic bombing of the Beirut barracks. I was standing in the tent after returning from breakfast and in the corner there was a soldier lying on the floor. He was unlike the others. He was whole. He was the first whole bodied Marine I saw. I’m literally shaking at this moment as I remember him. My hands are cold and I’m trembling and trying to keep my fingers on the keys. My stomach is sick and I have this pain deep within me at this very moment. Nothing affected me more than seeing this man in his sleeping bag. His stomach was bloated and dirt and cement pieces covered his body. He was decayed, dark, almost a dark gray. I walked closer to look at him and as I looked down upon him, I noticed his right leg looked as if someone had taken a can opener and pried his skin up. Then I noticed his jock strap had been blown off him, as he lay nearly naked in his sleeping bag. He was a tall man and heavy set, muscular like I would imagine a Marine to be. He had very little hair, like most Marines. He was someone’s husband, someone’s father maybe and someone’s son. He was a Marine and he died so senselessly. I stepped back at the very moment I realized he was a human being. Up until now, I was putting together pieces and parts of people, but certainly, they were not human. Not until I saw “HIM.” I remember stepping back and immediately saying to myself, “Is this what I’m raising my son for? Is this the life I want for my own son? My God, My God, how could you have let such an atrocity happen? These were innocent men just sleeping in their beds.” That image of the young man has haunted me nearly every day of my life and as I lay here in my own bed writing this, I have tears swelling up in my eyes. The pain I feel is so deep. The pit of my stomach hurts, I just want to get sick and throw up right now but I’m holding it in. My throat hurts. Have you ever cried so much that your throat hurts? Have you ever tried to hold back tears? It hurts even worse. Okay…so I’m gaining my military composure now, taking a few breaths and remembering that I’m in Aurora, Colorado, in my bedroom, and not in the tent. My body is shaking. Maybe I should take a rest. It’s 8:13 a.m. and I need to get some coffee and come back to reality. Something is pressing me to keep going. I don’t want to start rambling. I want to keep your interest.
As I stepped back from “HIM” and my thoughts remained focused on my own son, I then detached from my body. I only came to know the exact time I detached after nearly 20 years of living with PTSD. The real killer, I didn’t know I was living with PTSD while on active duty, until many, many years after I left the military. After all, I was not only a military officer, but I was also a mother of a five-year-old boy. It’s only natural that I would wonder about the young man before me. Who was his mother and how would she react when she heard the terrible news that her son died in a tragic and senseless bombing? 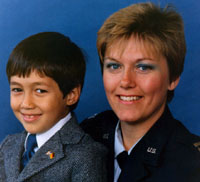 Author Bonnie J. Tierney served on active duty with the United States Air Force, both in the enlisted and officer ranks, from 1973 until 1992.

She holds a Master’s Degree in Public Administration from Troy State University. She is a disabled veteran and is currently serving as the Administrative Officer for Resources at the Health Administrative Center (HAC) for the Department of Veterans Affairs in Denver, Colorado.

“To my military brothers and sisters serving on active duty or to those who have served in combat-related activities, don’t wait until you are in that deep tunnel to ask for help.