by Stanley A. Ransom, Jr. 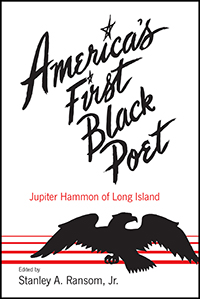 by Stanley A. Ransom, Jr.

With the publication on Christmas Day, 1760, of the 88 line broadside poem “An Evening Thought,” Jupiter Hammon became the first published African American contributor to American poetry. A natural intelligence and a deep religious fervor led Hammon to publish additional poetry and prose, and his “Address to the Negroes of the State of New York,” which first appeared in 1787, was later reprinted and distributed by the Pennsylvania Society for Promoting the Abolition of Slavery. Jupiter Hammon spent most of his long life on Lloyd Neck, later a part of Huntington, Long Island, where he was a slave to the Lloyd family. Some of his most productive years were spent in Hartford during the American Revolution. With newly found genealogical information on Jupiter, this present volume with new found poems has become the most complete and authoritative work on this early American black poet.

Hammon’s poetry reveals his joyous intoxication with religion, and in this vein he precedes the composers of those Black spirituals which are today an integral part of American culture. This collection of his poems and writings now includes two newly discovered poems found in New York Historical Society Library and in the Sterling Memorial Library of Yale University. Ransom notes that Hammon used several codes and indirect ways to let his fellow slaves know his real feelings about slavery. He used his Biblical knowledge as a cover.

Stanley Austin Ransom Jr. is former Director of Huntington, NY, Public Library and a student of Long Island History. He is past President of the Long Island Chapter of the Sons of the American Revolution. He is a descendant of Solomon Stoddard, a seventeenth century minister quoted by Jupiter Hammon. He first became interested in the Huntington Poet through the work of author Oscar Wegelin. In 1970 he proposed that October 17th, Jupiter Hammon's birthday in 1711, be celebrated as Black Poetry Day, "to recognize the contributions of African American poets to American life and culture and to honor Jupiter Hammon, first black in America to publish his own verse." Ransom is a US Army Veteran of WWII. He graduated from Yale University in 1951 and from Columbia University Graduate Library Service School in 1953. He has a biracial family and is a librarian, folk musician and storyteller.