I Had a Bike Named Jake 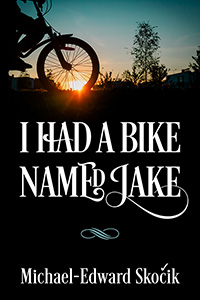 I Had a Bike Named Jake

What happens when boy meets boy?

How much trouble can a sixteen year old immigrant kid find himself in when he decides to get out of the house and take a walk on the country lane with suicide on his mind? He didn’t understand the heated debate taking place between his beloved parents. He had been hurt and his craving for love that he could not find becomes more than he could stand another moment longer. He is jolted to a new reality when he encounters another kid with the same thing in mind. Inexplicable bonds take place and last a lifetime. Blue-violet eyes and forest-green eyes help one another to grow together throughout their teen years. They both follow their dreams and help one another to push harder and harder to get where their dreams lead them. Dreams can come true, even when the most unexpected obstacles are thrown at you like a stone wall. A friend can be so much more than a friend. Don’t you agree?

Michael-Edward Skocik is, and remains, the product of immigrants to the United States from what was once Czechoslovakia. From birth he became aware of the nuances of language. He inherited what is called the Slavic or the ethnic ear. He always heard things that his American buddies didn’t hear. He possesses an advanced degree from L’École Française of Middlebury College in Vermont and taught courses in advanced French in a major secondary school in southwestern Pennsylvania. He has lived for an extended period of time in Toulouse, France. He has had the pleasure of spending time with family and newly acquired friends in Europe, Canada, Tunisia, Turkey and Morocco. The Caribbean is also on his list of travels. He currently shares a modest but gracious home with his Siamese cat named Beau. His ex-wife, his probably forever girlfriend, makes him a radically good Bloody Mary, if he is a good boy. His elder son Collin lives in Atlantic Beach, Florida with his high school sweetheart Amy Galway Skocik who happens to be a quite gifted pastry chef. Collin is a prolific published author of an entire series of novels in the science fiction genre. He also does closed captioning for the hearing impaired for nationwide TV. Michael-Edward’s younger son has written, produced, directed and acted in independent films after having obtained a certificate from Pittsburgh Film Makers. Jon, as he prefers to be called, lives with his wife Alyssa Bethancourt and they manage tending to a beautiful husky named Hento. Mr. Skocik, or as his former students called him, “Monsieur,” was one of six male siblings who gathered every year to drink and dine together on their parents’ wedding anniversary on October 2nd. We never missed the date. We are John, Raymond, Joseph, Andrew, Michael and Jerome. We raise our glasses to any family who still knows how to say, “I love you!” Michael-Edward sincerely hopes that you will savor every moment with his written words as he has savored writing them.