The Hope of the South 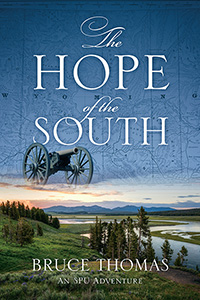 The Hope of the South

Wyoming, 1863: Colonel Augusta Smith has been given a secret mission—to hide an immense treasure for the South that will allow the Confederate government to fund a rebirth after the end of the Civil War. Colonel Smith must pick the men and secure a location to hide the treasure, and he must survive the war.

Colorado, Present Day: The Special Project Unit (SPU)—a clandestine organization that operates outside the normal US government bureaucracy—has been tasked with helping the government determine who is behind a terrorist event that could leave the eastern United States without electrical power…and plunge the entire government into chaos.

From secret offices deep below the Denver International Airport, SPU Director William “Wild Bill” Eddy and Special Project Officer Mark “Vector” Jones race to collect the information needed to stop the next terrorist act. And two eras collide when a chance encounter results in Wild Bill discovering a secret letter that connects his current situation with that of his great-great-grandfather, Colonel Augusta Smith.

As Air Force Academy graduates, Wild Bill and Mark have a bond that transcends work. But will they be able to stop the madman from Europe before all hell breaks loose?

Colonel Augusta Smith was a member of the Army of Northern Virginia of the Confederate States of America. The American Civil War had been raging for over three years. Born in Alabama, he never dreamed he would find himself camping in the Rocky Mountains during the American Civil War or commanding a select team of engineers and soldiers. His degree in Engineering from the University of Virginia prepared him for this specific operation. But it did not prepare him for the hardship the elements presented. As he peered into the blowing snow, the jagged mountains provided little color to his eyes. He longed to be back home in Virginia, even though he knew that his current assignment would never let him return to his pre-war home. He would be required to return to his father’s home when this mission was completed. Everything in this cold, barren territory was brown or gray: the ground, the bushes, and the mountains. The only change had been the miserable white snow, which had started falling two months earlier and was increasing in frequency. William “Wild Bill” Eddy was flying low over the flat terrain on the eastern side of the Rocky Mountains. His Fairchild Republic A-10C Thunderbolt II was currently traveling at 350 knots indicated airspeed (KIAS). The new General Electric TF-34-800 engines could easily provide more thrust and more speed, but an increased speed was not required for this test flight. The new engines, which were finally installed on the A-10C after years of procrastination by the Air Force brass, were quieter, more powerful, and consumed less fuel than the older engines. Alexi Drobneve was talking on his cell phone, standing in a small two-room apartment on the sixth floor in Washington, D.C. From his two-pane picture windows in the living room, he could see the top half of the Washington Monument. His apartment was situated just east of the White House. The Washington Monument was a constant reminder of a long-dead American president. He said into the phone, “The game at RFK Stadium has been postponed for the second time due to weather. Anticipate the resumption of the game in two weeks.” “Agree to timeline” were the only words the male voice said on the other end of the telephone line. The overseas call was terminated without either party saying another word. Alexi heard a click and the line went dead. 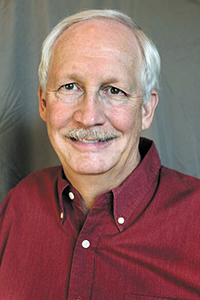 Bruce Thomas is a retired US Air Force fighter pilot and a current captain with a major US airline. He is the father of five children and nine grandchildren, and lives in Overland Park, Kansas, with his wife, Vivian. The Hope of the South is the first book in the Special Project Unit series.