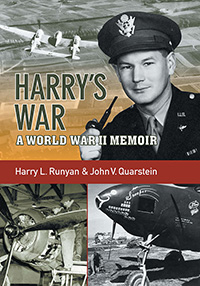 This story about the USAAF’s 30th Photo Reconnaissance Squadron in World War II comes to life with 135 photographs.

Harry’s War is an engaging personal story about World War II aviation. Captain Harry Runyan served with the 30th Photo Reconnaissance Squadron, US Army Air Forces, in the European theatre, collecting hundreds upon hundreds of photographs during his duty overseas. These stunning, thought-provoking images of planes, places, men, and battlefields come together to tell the tale of an oft overlooked; yet, extremely vital fact of how the Allies achieved Victory in Europe. Harry’s War shares stories about logistics, aerial reconnaissance, aircraft, jets, and rockets, and the men behind the men behind the guns—stories delivered by an engineering officer who later became a leading member of the NASA team that built the X-15 and the Space Shuttle. Award-winning author and military historian John V. Quarstein melds Runyan’s letters, field notes, and photographs to provide this inside look at one American soldier’s service ‘Over There.’