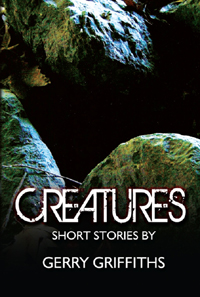 CREATURES come in all shapes and sizes, the mutated, the spawned, and those of unknown origin. Many are four-legged beasts, others slither and crawl, scratching and worming their way into our imagination with only one purpose in mind...TO SCARE THE LIVING HELL OUT OF US!
The deadliest are the predators that stalk on two legs...THE HUMAN KIND!
CREATURES is a compilation of twenty-two short stories that cross the genre borders into Horror, Thriller, Science Fiction, and Fantasy.
So be forewarned!
Beware of the creatures of the night, and be especially afraid of those creatures of habit...THE ONES WITH VERY WICKED HABITS!

In CREATURES...If bloodthirsty mutant creatures escaped from an abandoned research facility and terrorized you and your family...THINK YOU WOULD SURVIVE?

In ONE OF US...If one night an alluring vampire wanted to recruit you...THINK YOU WOULD THROW CAUTION TO THE WIND AND JOIN UP?

In A GRAVE MISTAKE...What if you woke up blindfolded and restrained and were told you had been in a horrific automobile accident...WOULD THE THOUGHT OF WHO YOU HAD KILLED DRIVE YOU INSANE?

In THE PARTY CRASHER...A diabolic young boy creates havoc in a family restaurant...THINK YOU MIGHT BE HIS NEXT VICTIM?

How long do I have?" I asked.
My physician pondered my question, took a moment to gather up the papers on his desk, and put all of my medical records in a nice, tidy stack.
I knew he was stalling. No doctor likes to tell his patient he's dying.
He looked me straight in the eyes and said, "I've gone over your x-rays, the MRI scan, your blood work results, all the tests."
"It is cancer," I blurted out. "I knew it!"
"Mr. Long, please. Let me finish."
"Just give it to me straight. I can take it."
"Mr. Long, physically, there's nothing wrong with you. You're perfectly healthy."
"Surely, the x-rays, the MRI, surely they must have shown something."
"What I am telling you is that you do not have a tumor."
"You're not looking hard enough. It's tricking you! It's hiding; you just haven't found it!"
"There's nothing there."
"Doc, you've got to believe me."
"Mr. Long, we've been through this before."
"I'm not a hypochondriac. It's real, I'm telling you. I can feel it. Well, maybe not right now, but I will. It's living inside me! I'm not crazy!"
"I'm going to refer you to another specialist in our clinic," he said and began writing on a prescription pad. He tore off the slip and handed it to me. "I want you to call Dr. Thomas. He's one of our finest psychiatrists. I'm sure he'll be able to help you."
"I told you, I'm not crazy."
His phone rang. He curtly turned away from me to answer it as if I were no longer in the room.
I got the hint and left his office.
I stormed into the elevator, crumpled up the shrink's phone number, tossed it on the floor as I rode down to the lobby, and went on home.
Well, not exactly home. That's where Peggy and the kids live.
I drove to my dinky studio apartment and had just walked in the door when it seized the hamstring of my right leg.
"Damn it!" I screamed and hobbled over to the couch.
I unbuckled my belt and dropped my pants, and there it was, bulging under the flesh. It had slyly tunneled under my epidermis, slithered onto my tendon.
It could do that. Move about my body without my knowing, and then, when I least expected it, dispense pain beyond belief, just as it was doing now, pulling the fibrous tissue stretched behind my knee taut like a rubber band about to snap.
As so many times before, the torture became so excruciating I blacked out. 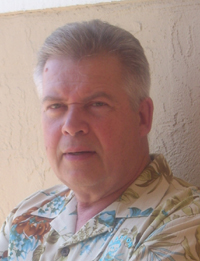 Gerry Griffiths earned his Bachelor of Science degree in Business at San Jose State University. His stories have received numerous honorable mentions from both Alfred Hitchcock Mystery Magazine and Writer’s Digest. Five short stories in this collection were recognized in the 77th and 78th Annual Writer’s Digest Writing Competitions.

The author, an avid horror fan, lives in San Jose, California with his wife, their daughters, and their three dogs.