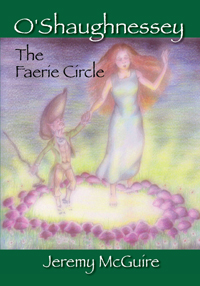 "The Five-senses-world is a small island in a vast ocean of all we do not know and cannot see; in that ocean, there may be faeries."

This second story about the intrepid leprechaun, O'Shaughnessey, takes up where the first left off, that is, with Bobby Mahoney grown and with children of his own.

Having lost the ability to see leprechauns, as it happens to the best of us as we grow up, he takes a trip to Ireland with his daughter, to study folklore and get back something that he knows he lost if only he could put his finger on what that was.

His daughter, twelve year old Margaret McNeil Mahoney will have none of it. She is, after all the brightest pupil at the La Madeliene Academy for (Exceptional) young Ladies and has no room in her life for such silliness as leprechauns and faeries.

O'Shaughnessey has persuaded a reclusive Shenache (storyteller) named Moira McCarthy to take the visitors in, hoping that Bobby may eventually be able to see him again because he knows the faeries need humans to believe in them or they will fade away into earthsleep.

While Bobby gathers folk tales in the town of Burkesbridge, Moira and Margaret tend to the farm. Margaret quickly adapts to the hard work and the total lack of modern conveniences like running water, electric lights and television. She’s intrigued by the old woman who is constantly muttering prayers for everything from baking bread to making butter, and holds daily commerce, she says, with Maeve, the Faerie Queen for whom the McCarthy family has preserved a large area of woodland.

When Margaret expresses skepticism Moira laughs, "The Five-Senses-World is a small island in a vast ocean of all we cannot see and do not know. In that ocean, there may be faeries."

Bobby, having been told not to step into a circle of mushrooms, does and is whisked away to the Court of the Faerie King, Finvarra, where he is kept as a husband for the princess. Slowly, painfully, Margaret begins to realize that there is a possibility that it is as the old woman says and her father was taken to be with the faeries. She can’t imagine her family without him, so entirely by faith in the possibility, she offers herself as a hostage if Finvarra will release her father. She is taken by kelpies under the lake and Bobby Mahoney is returned, having regained the Sight, but at a cost that may be too much for either him or Moira to bear.

This was the final indignity. Margaret McNeill Mahoney was, after all, firmly planted in the twentieth century. This was 1985 and there were televisions, videotapes, electronic games, radio and tape-players, cars, trains, and buses, yet here she was being bounced along in a horse-drawn cart, a jaunting-car they called it, and it was, according to the jarvey who drove the thing, the only way to get from the town of Burkesbridge to their destination, the roads being all too narrow, steep and bumpy for even a small automobile.

She and her father had taken a train from Galway to Doomsdale twenty miles west of Burkesbridge, and boarded a bus to get to the little town. From there, they hitched a ride on the jaunting-car that made regular trips to the hilltop farmhouse of Moira McCarthy, the objective of their trip.

The steel-rimmed wheel struck a stone, bouncing the car six inches into the air, coming down again with a bone-cracking thump. The jarvey, a frog-like man named Seamus O’Toole, laughed and apologized, but not quite sincerely enough for Margaret’s taste.

“You all right, Margaret?” Bobby asked, trying to replace his own backside on the narrow seat.

“Can’t remember when I’ve had more fun,” she answered sarcastically. “Where is this place, anyway?”

“Oh, you’d be near Burkesbridge in County Roscommon,” the jarvey said with a laugh. “The finest scenery in the whole world, but not much for travel, I admit, especially the closer we get to Moira McCarthy’s farm. Oh, you’ll like Moira McCarthy. A sweeter woman God never put on the earth. If it hadn’t been for that scoundrel Liam McCarthy, I would’a married her myself and I could’a done a lot worse, I’ll tell ya that. She could’a done a lot worse, too, but not a lot better. Thing was, that the one, the only man, who was the better of me was the one she chose.”

Margaret grumbled, “I just wanted to know where we were.”

Bobby shushed her, but he smiled when he did. He’d told her what to expect. Ireland has some of the best storytellers in all the world. The barber, the bricklayer, the farmer, and the boot-black, all had the Celtic love of words and used them more than any other people on earth. That was the thing she noticed most about the Irish -- their reluctance to shut up.

The jarvey continued his monologue over the cloppity-clip of the horse and the clatter and squeak of the jaunting-car. “Oh, there are those who say that she’s a wee bit touched in the head, a bit dotty if you want to know, especially since her husband died, and I can’t say as I agree, but it’s what some say. She is still a glorious handsome woman for all that. I’d have her to wife if it weren’t for my Bridget and the bitter truth that Moira McCarthy would not have me. Ha ha! She’ll always be one of my biggest regrets, God bless her, and curse Liam McCarthy for an interloper.”

Bobby said to the Jarvey, “I saw an old cottage back there off the road with a thatched roof. Is that still common?”

“Common in Roscommon?” the jarvey laughed. “Oh, no sir, that’d be for the tourists. During the season, we have families living there doing things the old way, but then at night they go home to their houses and click on the telly.”

“My Brigit likes that American show, you know the one with the two young men riding around in that red car with the southern flag on top; you know the one. She’s partial to the blonde one.” He snorted again and clicked his teeth at the horse. “No, very few people actually live that way in Ireland anymore, except for Moira McCarthy. Now, she’s the genuine article.”

Margaret gasped, “You mean she has a thatched roof?” She imagined all manner of vermin from bugs to mice dropping onto her as she slept.

”No, no, Liam McCarthy suffered a proper roof t’be put on, oh, it must be ten year ago, but one made of wood shingles, and, I might add,” the jarvey said with a wink, “caulked with pine tar. You will find not a single drop of petroleum on the McCarthy croft, and that’s certain.”

“Why not,” Bobby asked, “environmental reasons?”

“Well, you might say so, that you might.” The jarvey cranked his neck around as far as he could toward Bobby and grinned through his white mustache. “Moira McCarthy says it stinks of things once living and now long dead. Nothing that comes from that deep in the bowels of the earth, she says, can be good for the Gentry, she says.”

“The Gentry, that’s what they called the faeries in the old days and she’s kept with it. She’s…well, folks around here consider her sort of a guardian, you know, someone who looks after the Gentry and their homelands. I wonder you don’t know that, you being a scholar and all. She says petrol fouls the air and chokes them, and don’t they have enough trouble these days? Now your vegetable oil or animal fat is acceptable to them, and a good peat fire is like incense to them, d’ye see?”

“You mentioned that the Gentry are having trouble?” Bobby turned to face the jarvey. “What trouble?”

“Moira McCarthy says there’ll come a day when no one will see them, not even the likes of herself. Oh, time was when you saw them about all the time, mostly at dawn and dusk, you know, the times when it is neither day nor night but both day and night at one and the same time.”

Margaret muttered under her breath, “Yeah, you know everything.”

“Pair of ducks times you call it!” the jarvey laughed. “Well, I’ve never heard the like. To us it’s just the between-times when faeries are most visible if you are of a mind to see them at all. Time was, folks say, when you’d have to be careful about where you looked or where you stepped and always carry some iron about you as protection. Not so much any more. Few there are who see the Gentry at all and those who can are accounted daft.”

Here the jarvey grew solemn. “You know, there are even people in the New Ireland who consider the Gentry something of an embarrassment; there is little respect for them among the young ones mostly, the city people who decry the ‘leprechaunization’ of the country in the world’s eyes, particularly Americans who use the little creatures to sell everything from cereal to used cars.”

Margaret thought it was all so much “frippery” as Dr. Evangeline Drysdale the headmistress of her school called it. She asked in a voice that had a challenging edge to it, “Have you ever seen the faeries? I mean personally?” she asked, more to gauge the level of insanity in the man than anything else.

“Ha! Me? Well, there are times when I thought to have seen a few, but I don’t know. Could’a been just grasshoppers or the like. My father and grandfather, now, they had some stories to tell. Me? Not so much; more’s the pity.”

Margaret shrugged her shoulders and sighed. “I thought not,” she said to herself and turned to looking about at the Irish countryside with its stone walls enclosing different fields and the thorn hedge windbreaks keeping the rich soil in place. 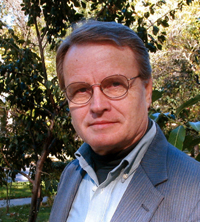 Jeremy McGuire is a playwright, author and illustrator who lives in an 1883 Victorian Queen Ann house in Chicago with his wife, Kat, who is also an artist. The Faerie Circle is his second published book. He attended Bradley University for three years before spending two years in the U.S.Army where he achieved great success as an actor at the Fort Bragg Playhouse. After service, he graduated with a BS in Theatre from Illinois State University and went on to get his Master of Fine Arts in Directing. He writes a weekly column for his blog which is found at his website at www.jeremymcguire.com 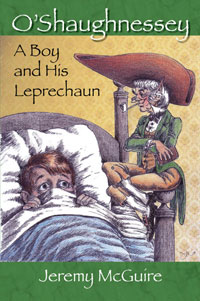