Dark Day of the Soul 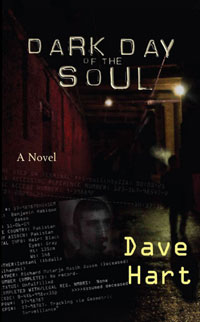 Dark Day of the Soul

When one declared your enemy becomes your trusted friend...

A kind working man hides his friendship with a fugitive POW until their discovery forces them to flee into the seclusion of New York's Adirondack Mountains.

TAKE ME TO THE DARK DAY OF THE SOUL WEB PAGE

From Chapter 8: The uniformed officer at the door startled Lee, and he asked what was wrong." We’re following up on a report of a suspicious presence,” the man said. “A stray POW was seen in one of the yards near here. One of your neighbors complained that he was in her yard.” The man checked his electronic notepad. “She said he had a green patch on his shirt, blue jeans, dark hair, really short. Have you seen anyone that fits that description?” “Uh, no I haven’t. Where’d, where’d this take place?” The man checked his pad again and said, “Down the street, in the yard of a. . . Peter and Brittany Dacie.” “I haven’t seen anyone. Then again, I haven’t been looking for anyone either, he-he.” The sound of running water could be heard behind the tense air, and the officer made a slight glance inside, his eyes poking around to the back. “Someone here?” “Huh?” “You’re. . .” The officer checked his pad again. “. . . Leland Karis, is that correct, sir?” “Yes.” Then, acting contemptuous toward the officer and closing the door a little, Lee continued, “It’s my girlfriend. Why?” “Your girlfriend,” the officer echoed. He looked at the pad again and rattled off information. “Because we show that this apartment is a one bedroom. Certified one bedroom, rent controlled 6th tier, occupied seven years, 12 months lease, full communications package included. Lease agreement signed by Leland Karis, Research Technician at MicroBioChemical Advanced Research. . .” The information trailed off as Lee interrupted. “Yeah, single occupant. So? She can’t take a shower before she goes home at night? Doesn’t mean she lives here.” The officer continued checking the information on his pad, paging through screens of information. There it was, in front of Lee’s tall eyes. He could see rows and columns popping up as the man tapped the screen with his pointer. He even saw that same, old government photo from his ID. All that vast panoply of electronic information siphoned from everywhere and funneled into this officer’s little personal notepad. Lee’s heart thumped out the measure of his fear. The hallway filled with a dark pallor that he could smell—like some strange Poe story coming to life, and everything went black and white. Little beads of sweat formed. He knew the officer could see them. The man looked Lee in the eyes in a staring match, then made the rounds of each bead of sweat, following the one that trickled down to Lee’s left eye. Finally he closed his pad and said, “Okay, thank you sir. Sorry to bother you. You have a nice evening.” 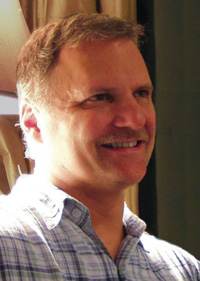 Dave received his BA in English and his MS in English Education from the University at Albany, New York. He is currently working on his next book of experiences among the people, an island memoir entitled "Solomon Boy." He became a "Solomon Boy" while living in a rural village in the Solomon Islands in the Pacific where he ate bat meat and chased rats for fun. He writes with his pet fruit bat, Chisel, from the Albany, New York area.