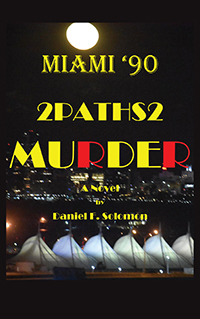 It was a good time. But holiday fun became Miami ‘90”: 2Paths2 Murder.

It may have been the best of times. But during the holiday season in Miami in 1990, having a good time was risky. Meet Raquel and her friend Suzy and their biology class, as they take on the US, Florida’s and even Cuba’s criminal justice systems. Meet the diverse city with a mysterious huge backlog of random killings. Meet: