A Guide To Regain Creative Confidence 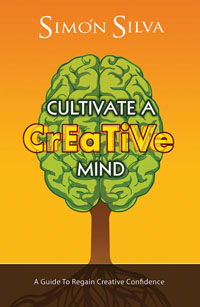 A Guide To Regain Creative Confidence

Cultivate A Creative Mind offers you practical ways to nurture your creativity through the use of insightful explanations and dynamic hands on projects. This book will help you find hidden abilities and talents by guiding you back to creative confidence.

Like many great Artists, Simón Silva, has worked hard and endured the challenges that go along with having a cultural background. Simon Silva was born in Mexicali, Mexico, and grew up in the Imperial Valley near the Mexico/California border. This served as a constant reminder of his ancestors. Silva’s family survived by picking fruits and vegetables -- yes, his roots are those of a migrant farm worker. Silva started helping his family work the fields from the time he was in elementary school. He spent his summers picking seasonal fruits and vegetables until he was twenty-three. The Silva family was on a limited income and there was no extra money for entertainment, so Simón took to drawing. He was a quiet youth; instead of talking he would draw; it was his release, which later became a means of communication for him. It was the harsh working conditions of the fields that inspired Silva to go to college, something his father initially did not believe in. He wanted to paint--to be an artist. With the blessings of his family, he started at Imperial Valley College where he received his Associate Arts degree. In 1986, he received a Bachelor of Fine Arts in Illustration from the Art Center of College of Design in Pasadena, California. This is a school infamous for its demanding course load, but Silva’s disciplined upbringing helped him to be successful. Simon Silva’s renowned artwork has appeared in many distinguished places around the world. Simón Silva is a success in his everyday life as well. He has been married for 23 years and is a father to three sons: Josue, Francisco, and Emilio. He grew up tri-lingual, communicating in: English, Spanish, and through Art. He is now working hard to educate people how to communicate through art. These days, Simón Silva travels throughout the United States, Mexico and Canada offering a workshop called, “Cultivate a Creative Mind,” to educators and students of all ages. This seminar encourages adults and students to communicate using the artistic talent that resides within them. Silva believes honing your artistic talent provides society with an opportunity to move forward in the right direction, by having better communication and better problem solving capabilities. Silva tells participants of his seminar that a child has no self-imposed barriers or limitations in the communication process. A child will draw or say what they are thinking without hesitation; as we age, we are jaded by public opinion, and are critical of our artistic talent. Thus, we stop drawing, and stop creating. Silva realized that he could use his art as a means of expression when he found something important to say that words alone could not capture. The message he hopes to spread is that everyone is important, that all of our lives are important, each of us has a piece of the solution and it's our obligation to make a difference in the world even if our efforts feel insignificant. All positive efforts make a positive difference to someone and that is important. Simón Silva has taken on this mission to educate others on artistic communication because he wishes someone had reached out to him in the same manner that he is reaching out. Silva says, “Employing artistic communication in our daily lives will create better professionals by making them better communicators, by getting them to ask the right questions. It also will provide individuals with the opportunity to find out who they are, what they feel, how they think.” Simón Silva wants to help create a society of critical thinkers and problem solvers, which will bring change to our world. Simón Silva is bringing creativity back! Short Bio: Simón Silva was born in Mexicali, Mexico in 1961 and immigrated to the U.S. when he was a year and a half years old. He is one of eleven children that grew up as a Migrant student, traveling across California, Oregon and as far north as Washington State to work every summer. Simón used his artistic abilities to help him survive his turbulent past and to stay in school; he is still the only one of eleven kids to graduate high school and college. 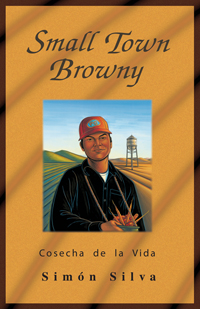