An Autistic Boy with Special Abilities 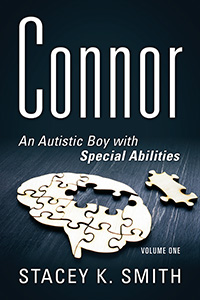 An Autistic Boy with Special Abilities

This is the first of a two part novel about a boy that was born with Autism Spectrum Disorder (ASD). As an autistic child, he sees the world through a different lens than most of us. He faces more obstacles than most of us ever have to face. At a young age he loses his mother and is raised by his father, who is an active duty United States Marine. As he struggles with his ASD he soon finds out that he has different abilities that are extremely rare and super-hero like. His father and others start to notice that Connor is more than a little different he is very unique. Connor starts using his special abilities as his father tries to shield others from discovering his son’s special abilities. As a government employee, he knows the threats that will come to his son if the wrong people discover his son possesses those special abilities. Eventually, the FBI and other government agencies find out about Connor’s special abilities and pursue to forcibly learn from him. This thrilling novel of struggle and suspense will keep you wondering what will happen next and what will happen to Connor. Will the FBI detain young Connor and force studies on him? Or will his father, shield those who will do his son harm from discovering the truth about his son?

I am a Marine Corps veteran with a BA in Environmental Studies and I’m currently working on my MS in Occupational Safety & Health / Environmental Management. I’m a divorced father of two boys that lives in Bakersfield, Ca. I’m the author of The Crystal Ship and I’m also in the process of publishing my political book called Read, Me Liberals with XLibris Publishing.