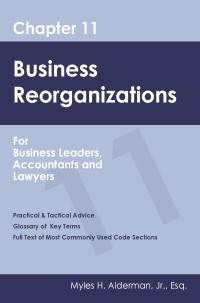 A Great Reference Source For Business Leaders and Their Professionals

Each year billions of dollars of business credit and contracts are restructured under Chapter 11 of the United States Bankruptcy Code. In the process, substantial fortunes are reallocated. Debtors in Chapter 11 reorganizations range from some of the largest business entities in the world to small local businesses. When these companies file for protection from creditors under Chapter 11, new problems and opportunities are created. Mr. Alderman draws upon over twenty years of experience counseling clients to explain the key legal theories and offer practical and tactical advice to business leaders, stakeholders and their advisors.


“This book should be a part of the libraries of management, practitioners and accountants. It is comprehensive.” The Halyard Restructuring Group, LLC.

“This well organized and comprehensive book will be a great asset for anyone on either side of a Business Bankruptcy.” William Wright, President & Publisher, Park Ave Publishers Inc.

“This book is a great reference source with a wealth of insightful information – No accounting firm’s library will be complete without a copy.” James E. Schultz, CPA, Sheptoff, Reuber & Co.

Bankruptcy is a complex and exciting area of the law. The Bankruptcy Code and the decisions interpreting it are rational and make sense - once you see how they fit together. There are a myriad of opportunities within the bankruptcy process to reduce losses, acquire key assets and earn outstanding results for those business leaders who understand how this process works.

It is my belief that with the proper tools to understand Chapter 11 business reorganizations, business leaders can evaluate the options for the deployment of assets within business reorganizations to realize superior return on investment. I also believe that with the appropriate information, accountants and general counsel can better serve their business clients by helping them spot potential problems and opportunities. 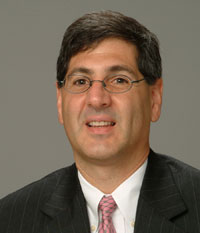 Attorney Myles Alderman has guiding business leaders, accountants and lawyers through Chapter 11 Business Reorganizations since 1986. His clients include professional services firms, manufacturers, distributors, retailers and financial institutions ranging in size from closely held businesses to some the largest corporations in the world.

His other published works include: Bankruptcy In Connecticut - A Creditor's Perspective, (Lorman, 2004), Revised Article 9 - Beyond The Basics, (Lorman, 2002); Bankruptcy Law - A Creditor's Perspective,(Lorman, 2001); Preparing For Disaster Before It Strikes-Asset Protection Strategies That Work - Program Faculty NAPFA, 2000. Collecting Judgments In Connecticut - Beyond the Basics, (NBI, 1993); Techniques for Acquiring Undervalued Assets From Bankruptcy Estates, (CBA, 1993); Setoffs Under Section 553 Of the United States Bankruptcy Code, (CBA,1992); Employment of Professionals Under Chapter 11 of the Bankruptcy Code, (CBA, 1992); Bankruptcy Law for the Corporate Lawyer (CBA, 1989); The Bankruptcy Chapter of the Connecticut Bar Association's Basic Practice Manual in 1994; Understanding Why Debtors Sell Assets,(CBA, 1993); Major Changes Affecting the Insolvent Homeowner, Connecticut Lawyer, July, (CBA, 1993); The Recession's Silver Lining, (On the Money, 1992); The FDIC's Power to Stay Proceedings, Connecticut Lawyer (CBA, 1992).