The Blood of Stonewall 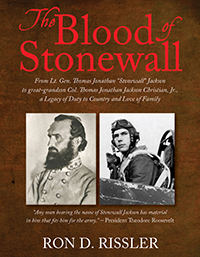 The Blood of Stonewall

The Blood of Stonewall, A Legacy of Duty to Country and Love of Family

Lt. Gen. Thomas Jonathan Jackson
“So upright was his life, so profound his faith, so exquisite his tenderness, that Jackson’s many victories are almost his least claim to be ranked amongst the world’s true heroes.”
– Col. George Francis Robert Henderson, British Staff College professor and author of the two volume series Stonewall Jackson and the American Civil War

Julia Jackson Christian
“The daughter of Stonewall Jackson may she live to perpetuate to future generations the lineal blood of her immortal father.”
- Richmond Examiner (Richmond, Virginia, February 12, 1866)

Thomas J.J. Christian
“I appointed a grandson of Stonewall Jackson to West Point because I did not want Jackson’s blood to be out of the army.”
– President Theodore Roosevelt (1911)

Ron Rissler and his wife live in Jefferson County, W.Va. on a farm owned by his family since 1852. After working on the farm, serving in the U.S. Navy and being employed as a paralegal for twenty years, he retired in 2011. Ron, from an early age, has read several books about Lt. Gen. Thomas J. “Stonewall" Jackson due to the fact that four direct ancestors served in the Stonewall Brigade during the Civil War. Because none of the writings addressed what happened to Jackson's wife and daughter after his death, Ron, over an eight year period, researched the lives of his widow, daughter, two grandchildren and his great-grandson who, more than any other, simulated the attributes of his famous ancestor.