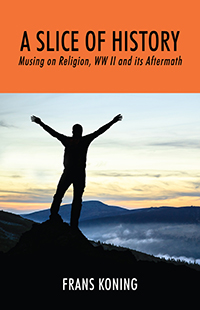 A View of the World from Three Continents

From a farm in The Netherlands to poverty-stricken Sierra Leone…from the brief peace after the Great War to the horrors of World War II…from Europe to America…this extraordinary book of anecdotal essays ranges through the life of a man who has lived broadly and deeply. Author Frans Koning shares his observations and impressions on topics ranging from what it was like to be a teenager in a Nazi-occupied country, to his experiences in Africa with the Peace Corps, and his move to the United States. He has experienced the effects of brutality and fear and lived to tell about man’s inhumanity to man. With a perspective gained from three continents, he can see how human experience is both diverse and similar…and how patterns in human behavior emerge, from the Waffen SS to ISIS. Immediately engaging, loosely structured, and retaining a piquant flavor of his native land in a Dutchman’s English, A Slice of History is a uniquely personal yet immediately accessible memoir of life during the most turbulent decades of our time.

Frans Koning grew up on a tulip and dairy farm in Holland. He was born and raised during the 1929 worldwide economic depression. After WWII, he attended the School of Medicine at Leiden University. In 1962 he joined the Peace Corps and practiced medicine for two years in Sierra Leone, West Africa. Subsequently, he returned to the United States and practiced emergency medicine and family medicine in Washington State, where he still lives.