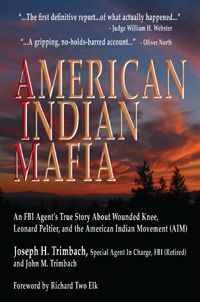 The book the AIM leadership does not want you to read!

For the first time ever, a senior FBI Agent reveals the true history of the American Indian Movement (AIM). And for the first time, former Special Agent in Charge (SAC) Joseph H Trimbach spills the beans on what really happened during those turbulent years on South Dakota's Pine Ridge Reservation. Trimbach's documented account exposes AIM's dirty little secrets unlike any other history book. In fact, American Indian Mafia exposes the history books! It is time to set the record straight for the benefit of educators, historians, and all Americans who care about the TRUTH.

The 1970s legacy of the Pine Ridge Reservation in South Dakota is haunted by the forgotten suffering of innocent victims and a falsified history found in almost every library in America. Sadly, what should have been a needed voice for Native America became a criminal enterprise on the reservation, where property was destroyed and lives were lost. A record founded in falsehoods and distortions completed the betrayal and denied the reality of lost opportunities, shattered lives, and a Movement hijacked by its leadership. Today, the perpetrators are known as "brave warriors" and "selfless activists," while many of their crimes against Indians are minimized, or not mentioned at all.

In this provocative, first-person narrative, Special Agent Trimbach (SAC-Minneapolis) chronicles the true legacy of the American Indian Movement leadership and how this small group of radicals tore a path of destruction through the Pine Ridge Reservation on their way to personal gain, fame, and fortune, and how:

• AIM leaders extorted funds from religious organizations, the federal government and unsuspecting supporters, and kept much of the money for themselves.

• Using Federal grant money, AIM leaders planned and executed the takeover of Wounded Knee village on the Pine Ridge Reservation in 1973, ending in its complete destruction.

• AIM leaders, armed with a cache of weaponry and explosives, plotted the takeover of the reservation and the elimination of the elected Tribal leadership.

• AIM leaders conspired to murder their opponents, even their own members.

• The media was fooled into believing AIM conspiracy theories, and often missed the real story of AIM treachery and violence.

• How Leonard Peltier and his lawyers have bilked millions of people out of their time and money in support of his claim that he is an innocent man "railroaded" into prison.

• AIM supporters have profited from promoting bogus history, such as claims that the FBI used a COINTELPRO (Counter Intelligence Program) against AIM leaders and their lawyers, backed roving death squads on the reservation, and conspired in the (AIM-ordered) execution of AIM member Anna Mae Pictou Aquash.

• Authors, journalists, and historians unwittingly passed along falsified accounts, much of it designed to divert attention away from AIM criminal activity.

• In the wake of the AIM legacy and continued governmental failures, the Pine Ridge Reservation suffers from many social malignancies such as unemployment near 90%, life expectancy of approximately 56 years, rampant alcoholism, and widespread child sex abuse.

The problem with political loons like the professor from Boulder is that they never seem to get around to actually addressing the problems of their claimed constituents, in this case, Native Americans. If this Indian wannabe was genuinely interested in the plight of Pine Ridge residents, one would think he would be out in front on the issues of the day, putting his taxpayer-subsidized wampum where his mouth is. Instead, we get substandard academics laced with self-indulgent fantasy under the guise of constitutionally protected speech and “academic freedom”... When it comes to addressing the most malignant problems plaguing the reservation, AIM remnants are characteristically AWOL, and in protected sanctuaries of mock scholarship, “historians” like Churchill are clueless.

Joseph H. Trimbach graduated from Canisius College in New York and received an MBA degree from the University of Buffalo. He served three years in the U.S. Marine Corps, attaining the rank of captain, before becoming an FBI Special Agent in 1956. His investigative work included kidnappings, bank robberies, and the famed undercover operation that exposed police corruption in Jacksonville, Florida, in the 1960s. This case won him accolades from both FBI Director J. Edgar Hoover and Attorney General Robert F. Kennedy. Special Agent Trimbach served overseas on the Bureau’s inspection staff before being appointed SAC - Minneapolis in 1973. Throughout a career that led him to six Field Offices, he earned numerous cash awards and letters of commendation from three Directors, as well as personal letters of thanks from the Secretary of the Interior and the President of the United States.

After retiring out of the Memphis Field Office in 1979, Joe joined Guardsmark, Inc., an international security services firm, as a senior Vice-president. He later worked for the U.S. State Department. Joe and his wife of 56 years, the former Kathleen Rahill, live in Florida, and they enjoy traveling to visit their seven children and 20 grandchildren.

John M. Trimbach graduated from the University of Notre Dame where he earned a BS in Aerospace Engineering. He earned a Masters Degree from the University of Tennessee in 1981. John served in the Air Force for eight years as a fighter pilot before joining a major airline in 1989. John lives in Georgia with his wife and four children. Both John and Joe worked as Backround Investigators for the U.S. State Department. American Indian Mafia is their first published book.