Always A Soldier But Never G.I. 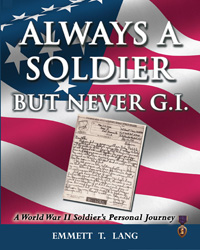 Always A Soldier But Never G.I.

LETTERS TO THE HOME FRONT: MEMOIRS OF A WORLD WAR II SOLDIER

THE YEAR WAS 1942 AND THE COUNTRY WAS UNITED in the fight against Germany and Japan. On the home front, all industry was mobilized for war, and the draft boards were collecting young men to join the armed forces. Emmett Lang, a naive 20-year-old, wanted to be a soldier. But even after scoring a nearly perfect score in the Army General Classification Test, he was sent to infantry basic training. Despite this inauspicious beginning, Lang decided he would do his duty and take every opportunity to make his service career as rewarding and enjoyable as possible. This is the story of Lang’s Army career, an honest account that includes letters home, divisional and regimental histories, and after-action reports – with a generous dose of humorous anecdotes. Always a Soldier But Never G.I. contains stories of the action on the front lines in Europe and Battle of the Bulge, and gives an insider’s personal view of the life of a World War II soldier—the hardships, adventures, and sometimes the horrors—yet Lang’s story is told with wit, humor, and a love of life that cannot be suppressed.

Visit my website for more information and interesting links about Battle of the Bulge and World War II.

Send me your comments at alwaysasoldierbutnevergi@gmail.com 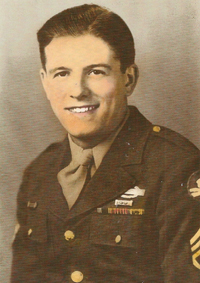 About the Author: Emmett T. Lang lives in Johnstown, Pennsylvania. He is an engineering graduate of Lafayette College, with a master’s degree in Labor Relations from St. Francis College. Lang is a member of the Railsplitter Society of the 84th Infantry Division, serving twice as president. He is a retired coal industry executive who was active in mining for 35 years and ended his career as president of the Central Pennsylvania Coal Producers Association. Lang is also an Eagle Scout who is still involved in Scouting after 75 years. He served many years as Scoutmaster, as president of two Boy Scout Councils, and led a Philmont Expedition. He and his wife Eloise were married for 49 years and have four children, five grandchildren and eight great-grandchildren. He enjoys reading, spending time with family and friends, traveling, attending Army reunions, and is active in his church.