A Season for Ravens 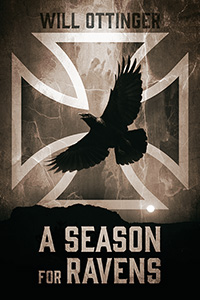 A Season for Ravens

The year is 1918, during the final chaotic months of World War One where three pilots must each confront their personal demons in the skies over France and Belgium. Nathan Fleming, fleeing from Chicago’s slaughterhouses, is a volunteer officer in the Royal Flying Corps, struggling to overcome his working-class origins. His newfound friend, Billy Teal, is a wealthy Southerner and gifted pilot who cleverly conceals his insanity and murderous intent. Across the lines, they face Leutnant Stefan Dietzel, a disillusioned ace of the Imperial German Air Service, separated from his dying wife and tasked with molding a forgotten group of young pilots. The three fight to survive in the high arena—where the average lifespan is three weeks—and on the ground, where they touch the lives of those whose paths they cross: Rawlings, the alcoholic commanding officer living with daily fear. Blake, the meddling sergeant who sees everything. Caroline Stanhope, an upper-class young woman shattered by the war who falls in love with Fleming. And Rudi Reiter, a renegade German pilot and Dietzel’s closest friend. Madness, compassion, and fate collide with tragic consequences on the war’s final day, creating a legacy of guilt and redemption that must be reconciled 20 years later. Meticulous researched and historically accurate, A Season for Ravens is a fast-paced novel recounting the first aerial war—where sudden death is deemed an acceptable gamble. "A Season for Ravens" recently was awarded 3rd place Honorable Mention in 2014-2015 Historical Fiction by Readers Views Book Reviews.

Fleming hoisted himself into the cockpit. Maybe McPherson was always like this before a patrol, he thought uneasily. He yelled at two men who waited by the SE's nose. They swung the huge four-bladed propeller, and the Hispano-Suiza engine caught with a roar. Acrid exhaust smoke filled his mouth, and more engines started, shattering the morning stillness. He tried to remember everything he'd been told and gave an involuntary start when a mechanic leaned into the cockpit. The man yanked his shoulder harness tighter, patted his shoulder, and disappeared in the darkness. He set the magneto switch by feel. The horizon was a thin line of pink, the trees barely visible. He waited until the SE beside him trundled away and eased his throttle forward. His aircraft bumped across the grass and gained speed. He increased throttle and found himself quickly airborne. The earth dissolved into a dim void and he climbed toward the pinpoints of multiple exhausts. The patrol turned east. Stacked in a V-formation, McPherson was the arrow point, a long yellow streamer trailing behind his rudder. To his right Fleming made out Teal's broad white arrow. Priestley and a fifth SE brought up the rear. As it slowly grew lighter Fleming saw a line of observation balloons hovering along the horizon. Were they British or German? He'd already forgotten what he's been told during briefing. He settled deeper into the seat. Cold quickly seeped into his hindquarters and boots, inching through his body until he began to shiver. His feet ached until he no longer felt his toes. Frigid sunlight nudged the horizon, reflecting off the four sets of goggles around him, transforming the others into bug-eyed strangers. Exiled inside the maze of metal, wood, and cloth, only his engine's good will kept him aloft. The others were unable to help him now, and for the first time Fleming understood true isolation. 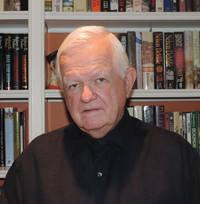 Will Ottinger is a Houston resident and life-long enthusiast of World War One aviation. He previously published a non-fiction work in England on the art of painted military miniatures where he gained the recognition of Grand Master painter. His interest in the history and lore of First World War aviators began as a boy, and now includes a large collection of original documents, letters, autographs, and photos as well as an extensive personal library on the subject. The collection proved invaluable in researching "A Season for Ravens" to ensure its accuracy and feel for the period. A History major and graduate of Emory University in Atlanta and Northwestern Graduate School in Chicago, Ottinger spent most of his early life in Savannah, Georgia. He's now semi-retired and currently owns a consulting firm in the wealth management industry where he is an acknowledged trainer, speaker, and writer. He and his wife, Sandra, moved to Houston seven years ago, finding a thoroughly enjoyable new home. He is currently working on his next novel. Will Ottinger is a lifelong enthusiast and collector of World War One aviation. He has owned a training/consulting company for the past 20 years and is semi-retired. Previously, he published a book on the art of military miniatures. He and his wife now live in Houston, Texas, and can be contacted at osrtrain@att.net, (713) 877-1280, or (713) 724-8615