Constitutional Intent for Electing the Presidency: How the Twelfth Amendment Failed to Anticipate the Rise of Competing National Parties 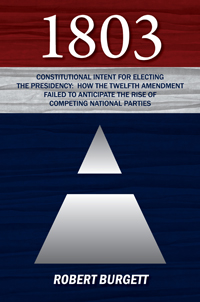 Constitutional Intent for Electing the Presidency: How the Twelfth Amendment Failed to Anticipate the Rise of Competing National Parties

DO YOU THINK YOU UNDERSTAND HOW OUR ELECTORAL SYSTEM EVOLVED? THINK AGAIN!

In this fascinating examination of the Twelfth Amendment and Article II of the Constitution, historian Robert Burgett demonstrates the powerful forces at work that forced the rise of competing national parties, and how the Twelfth Amendment was designed to combat this destructive trend. Burgett takes the reader back to a time when the Union was not yet truly united, by drawing parallels with a hypothetical future North-South American Union. Quoting source material from drafters of the Constitution, and using electoral results and statements of belief from prominent statesmen such as George Washington, Thomas Jefferson, and John Adams, Burgett shows us how geographical divides influenced party politics, and how the role of the vice president has been distorted in comparison to how it was originally conceived. Allowing his thesis to rise naturally from the facts, rather than cherrypicking facts to fit a preconceived thesis, Burgett presents a powerful case for Article II of the Constitution forcing the rise of competing national parties, and the Twelfth Amendment as a much-needed alteration to ensure inappropriate geo-political control over the federal government. 1803 is as gripping a narrative as it is educational, giving the reader food for thought, and a much better understanding of a widely misunderstood issue.

Robert Burgett is an Independent Historian whose specialties include legal research and analysis.