The 10 Little Indians (of Successful Screenplays)

Lessons from the Masters of Moviemaking 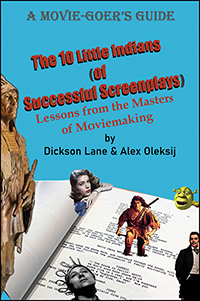 The 10 Little Indians (of Successful Screenplays)

Lessons from the Masters of Moviemaking

Learn from the Masters of Moviemaking about writing screenplays. "This is a valuable resource for cinematic professionals and movie fans alike!"

Steven R. Lindahl4.0 out of 5 starsAn interesting, how-to book for screenwriters
Reviewed in the United States on April 7, 2022
This book is an interesting, how-to book for screenwriters. It could also be appreciated by film fans who want to look closer at the work they enjoy since it uses well-known films to emphasize points the authors are making. The writing is straightforward and easy to comprehend.


One of the points the writers made that I liked was that "The Best Screen Comedy is not 'Funny' (as much as Unexpected)." That's something I can use in my writing and there are plenty of other examples where there is overlap between formats.


I recommend this book to anyone trying to write screenplays, especially someone just starting.

Claire H.
Someone gave me this book. He thought it would interest me since I love movies so much. Once, I got into it, I began to realize what made some of my favorite classic movies so special—John Ford westerns, The African Queen, The Great Lebowski, Butch and the Kid. I now see movies with very different eyes and a deeper appreciation for all it takes to make movies. Wow!

Richard A.
The book was given away at a book group event. What I found particularly interesting was the Introduction, describing how many “armies of armies” are needed to make a movie, and how expensive even one day of filming can be. The “Side by Side by Side” chapter, which compared really great movies next to ones that suck was really interesting too. I even checked “Ishtar” out of the library to see if it was as bad as it has been portrayed. It was! (I am so glad I did not have to pay for that POS!)

Emily J.
I am an aspiring independent filmmaker. The chapter on “Location Economics” was spot-on! What was described in that chapter was almost exactly what happened on one of my first film shoots where I was on the Second Unit camera team, almost verbatim! To this day, no one has screened it. I can’t even use it for my “reel.” I wish I had read this book before working on that film. It would have made my life so much easier to navigate. It is a great resource for cinema professionals and movie lovers alike. It really is.

Jake B.
I like that there was a reference to other good books about writing screenplays. That was cool. These guys sure have seen a lot of movies! OMG!

Maggie W.
Yep. This is what my brother, an award-winning screenwriter, director, and producer, goes through every day. If people are going to be in this business, they need to know this stuff.

Dickson is a screenwriter, playwright, author, stage, and screen actor. Like Alex, Dickson has spent many years on the road with national tours and regional theaters. He has narrated many audio books. Formerly he was also a film critic in New York City. His play, And She Was There is currently on the Regional Theater Circuit. In his “other life” he is a Certified Technical Trainer and Instructional Designer. Alex has been a film maven since childhood and a discerning student of film for most of his adult life. After graduating from college with a degree history and archaeology, Alex then spent 20 years crisscrossing the country as a professional actor. Now the office manager for a Manhattan law firm, he is the author of three other non-fiction works: The Girl from Clark Street (a memoir of his family), and two books on British history, The Island Crown and The Throne of the World.