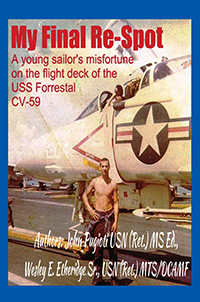 Survivors of the January 15th 1978 mishap believe that what happened on that evening was one of the greatest cover up’s in US Naval Aviation history. But what really happened on that tragic evening when the FID was on Sea Trials off the coast of St. Augustine, Florida? History and eye witness accounts reveal that unbeknownst to the Ship’s Company and Carrier Air Wing Seventeen personnel that they would become participants of the second worst documented aviation mishap on the flight deck of the USS Forrestal CV-59. Our story is literally unknown. It’s a contrast in the directions of the authors of this book, two U. S. Navy veterans, John Pugioti and Wesley E. Etheridge Sr., who at the very young ages of eighteen and nineteen both where on the flight deck that evening working as a team of two, as Fly-3 Blue Shirts. Ultimately, the mishap that occurred that evening, would exponentially dictate the direction of both young men’s lives forever. In essence, it would be their “Final Re-Spot” together and the last time they spoke or saw each other, until thirty-six years later.

The best practices learned from the USS Forrestal CV-59 tragedy of 1967 were invaluable to generations of firemen, seamen, airmen, constructionmen,and aviators alike. The sailors of the 1967 tragedy modeled what men do to move forward after horrific tragedy regardless of mishaps due to human error or otherwise. Their courage and their success under fire transcends the seas as it has also motivated triple threat special operators when they are on land, who eventually are confronted with the anxiety and uncertainty of combat operations. I am sure many of the heroic actions that they exhibited with outstanding success are a direct reflection of what the FID sailors of the 1967 tragedy did correctly. Moreover, in today’s U.S. Navy, the best practices learned most likely have been expanded upon. But with that prime example of superior leadership under fire to follow, what happened to the plat lens footage from the January 15th 1978 tragedy? 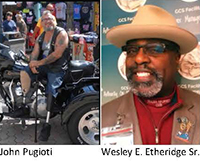 About the Authors: Author John Pugioti is an Italian American, he was born in Brooklyn and raised in the Bronx, NY by his Italian immigrant parents John Nicholas and Rosalie Margaret Pugioti. He is a service connected disabled veteran and earned his Bachelor’s degree in Psychology from Lehman College. Two years later he earned his Master’s Degree from Hunter College in Education. He is a former Vocational Rehabilitation Counselor and an avid Harley Davidson owner and rider. Author Wesley E. Etheridge Sr., is an African American, born in Portsmouth, Virginia and raised by his parents Wassee and Mabel Virginia Etheridge. He is a service connected disabled veteran and Principal Consultant of GCS Facilitators and Consultants, the U.S., and internationally known “Leading Authority on Military Veterans and Anger Management.” A Behavioral Influencer, Wes is a retired U.S. Navy Master Training Specialist (MTS), Diplomate Certified Anger Management Facilitator (DCAMF) and has a degree in Alcohol and Other Dug Studies from San Diego City College.