The REAL prison is in the recesses of a man's heart...

During the years that slavery thrived, an estimated 12-25 million men, women and children were stolen from the continent of Africa. Many of these unfortunates spent their last days at home, languishing in the bowels of Cape Coast Castle. In caverns deep and dark, they were caged by the thousands. There, they awaited the floating prisons that would take them to unknown places - cages that would strip their humanity and smoother the sound of their voices. Their languages would be lost - effectively silencing them for many seasons.

The Cape symbolizes a prison that caged the minds, hearts and spirits of these slaves, and their descendants. The prison that the author explores with the reader is not Cape Coast Castle. It is not the bowels of great ships. Instead, he delves into the experiences of souls held captive by anger, passion and pain, on a journey that chronicles his study of the human condition. For this exploration, he writes first of his own experiences, and then expands his work to include stories of those who have influenced his perceptions of what life has to offer.

In his poetry, he transports the reader on a journey to rediscover and revive the primal lost voices of our ancestors. On this journey, he sometimes describes the mirrored walls of self-discovery. At other times, he talks of a world seen through bars - a world in view, but out of reach.

He escapes into the hearts, and minds of others to explore the depth of common experiences and feelings. Exercising what seems an unfettered imagination and practiced storytelling skills, he captures life's nuanced experiences and explores the hidden recesses of the heart.

Although I do not remember it directly, I know that I must have come from proud people.
My black skin is proof of my entitlement, just as this pile of rocks is an edifice to my plundered legacy.
Family roots vanished as my people passed through "The Door of No Return."
Future generations disappeared THEN, and NOW we follow a centuries old trail back home to the Cape.

Cape Coast Castle is my first view of home – long gone and newly found.
I sob now in a place where my ancestors once screamed.
Surely they would mourn the memories, when a place such as this comes into view and into recollection.
But, the place these rocks now stand - no matter how bad, was once our home...long before it was our prison.

Ronald Montgomery is a student of the human condition. He wields words in ways that capture myriad emotions in poems- much like a photographer uses a camera to capture moments in time. He captures these photos for himself and his readers to fill scrapbooks of a lifetime. Through his writing, he is part of a family that circles the globe. This effort is the result of an imagination that is unfettered and free. Escape from Cape Coast Castle is the second in a series of recent pursuits, with work progressing quickly on volume three - SPIRIT to Spirit. 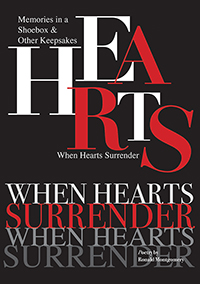