One Woman's Memoir of Her Dog, an American Pit Bull Terrier 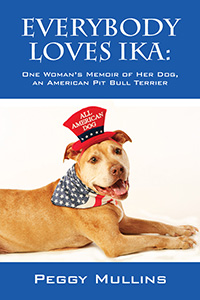 One Woman's Memoir of Her Dog, an American Pit Bull Terrier

The healing power of a dog's love.

Peggy Mullins grew up in a hellish adoptive home with distant, abusive parents who found every opportunity to damp out the tiny glimmers of happiness Peggy managed to cling to in such a cold environment. Ika, a beautiful Pit Bull pup, was spared at the last moment from being born into a similar hell. Though his mother and many of his siblings didn’t make it out of their gruesome home alive, Ika survived thanks to the skilled and compassionate work of a quick-thinking vet and a few big-hearted volunteers. In time, Ika found his way to Peggy, who would give him a loving permanent home in which he would thrive. In return, Ika would teach Peggy the kindness, patience, and unconditional love that had long been absent from her life. Along with the surprising affection of a special man and a spectacular family of animals, Peggy’s book poignantly guides readers through her difficult journey toward healing and peace.

Horses need to be acclimated to each other when they first meet. They can't just be thrown together in the same area unless the owner wants blood and vet bills. Tauri needed time to get to know the miniature horse, since this was his turf. Dakota needed to adjust to his new home and his new horsey buddy before they met without a fence between them. I put the new horse in a fenced field next to Tauri's. Tauri pinned his ears. Dakota did the same. Then they lunged toward each other, both of their snapping teeth glistening in the afternoon sun. Thank goodness the fence held as the two of them slammed into it to attack each other. They kicked at each other and tried to strike with their front hooves. Both basically did their best to get past the fence for the kill. "Oh," I said to Ron as we watched. "This is going to take some time." The two raged furiously at each other. Eventually, each went to their respective hay piles. Whenever one caught the other looking at him, the battle resumed. It was a very long day. The next morning I took Ika with me to the barn. I didn't know what to expect. Would they have defeated the referee fence during the night? If so, which one would have received the worst of it? Tauri was much larger and could inflict a fatal kick to the small horse, only thirty-nine inches tall. Dakota too could do a lot of damage if he attacked from under Tauri's belly. I approached the two paddocks. Amazingly, the fence was still up. As soon as Dakota saw Ika, he ran around his field and kicked his back legs as high as he could. Then he charged Ika and tried to attack him. Thank goodness for the referee, which Ika and I were on the other side of. Ika just stood there. I was sure he was wondering what to make of this maniac mini. I had forgotten that in his former life wild dogs had tried to chase Dakota down for an easy meal. This little guy was anything but easy. I took Ika into the barn only to hear the crashing of horses testing the fence again. I thought of Dakota's name. It didn't fit him. The name reminded me of a quiet, lazy animal grazing without care or concern. This animal was wild and seemed ferocious when he didn't like something such as Tauri or Ika. I decided to rename him. In time, a name would come to me. Oh boy, when it did, it was really fitting too. Two weeks after my now nameless horse arrived, horse battles were still waging. Usually that amount of time is more than enough for horses to get used to each other. Not these two, though. I didn't let Ika get within range of the unnamed thing in the paddock. Even though he was a small horse, he was all power and could easily kill my dog. I noticed one day that the mini was just staring at Ika. He didn't offer to attack him through the fence. After all, he still had Tauri to do battle with anytime he chose. Why waste energy on a dog who wasn't trying to kill him? Ika was sitting on the other side of the referee looking back. "Hum," I said out loud. "Maybe there's hope after all." Moments later those hopes would be dashed. I got busy with something in the barn and forgot about Ika not being in there. I suddenly realized he was missing. I looked outside and was horrified to see him in the middle of the mini's field. I panicked as I watched the horse slowly approach my dog, who was just sitting there watching him. As the horse drew closer, he lowered his head. The mini was stalking the dog, preparing for the pounce. What should I do? If I called Ika, his attention would be diverted to me, giving the attacker an advantage. If I didn't, the horse could, with one strike of his front leg, kill Ika as I watched. I was frozen with fear and indecision. Then my worst nightmare came true. As I stood there paralyzed, the mini stopped in front of Ika and stomped his front feet. It was a warning. It shouted,"Get out of my field or you, Dog, will pay dearly." Ika just sat there, inches away from hooves that could end his life. He was wagging his tail. Suddenly Ika sprang up and took off. The mini was hot on his tail. "Should I call him now? Should I not and just hope he can outrun the horse?" The questions echoed through my mind, not landing on an answer. As quickly as he had sprung up and sped away, Ika stopped and turned toward the quickly descending equine. To my amazement, the horse stopped too. They touched noses. The mini spun around and hightailed it across the field. Ika was now in hot pursuit. Instantly, I was afraid for my horse. Was this aggression? Was it what Ron had made me promise to return Ika over? What if he attacked the horse, dragging him down by the throat? The little horse skidded to a stop and tured to face his chaser. Ika stopped also. Again, their noses touched. Then Ika took off, racing across the field with the speedy bay horse after him. Stop. Noses. Spin. The mini ran as fast as he could. Stop. Noses. Spin. Ika ran as fast as his legs would go. A golden streak followed by a brown one zipped back and forth across the ground. "They're playing," I found myself saying to no one. I watched the two chase each other for ten minutes. Finally, completely exhausted, they walked over together to where I was standing by the fence. Ika squeezed under the lowest board of the fencing. He was smiling.

Peggy Mullins, B.A. Psychology, George Mason University, lives in Virginia with her husband and has a deep love for horses and dogs. She works as a freelance writer, and Everybody Loves Ika is her first book. To learn more, visit everybodylovesika.com or peggymullinsauthor.com. Follow Ika’s adventures on his blog: everybodylovesikadogbook.blogspot.com. 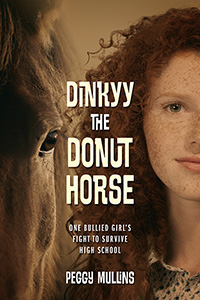