The Winds of Malibu 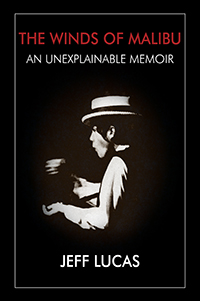 The Winds of Malibu

All he wanted was another 1920s Hollywood Utopia!

The Winds of Malibu is the true story of a boy whose father (a computer engineer with a grudge against Hollywood) has held on to a house in the movie colony of Malibu, California, after a bitter divorce. At the age of eleven, Lucas is fiercely bitten by the Acting Bug and does anything to act. What ensues is a war between him and his controlling father as to his Hollywood aspirations, amid crippling anxiety attacks. The story of an outrageous upbringing, where friends are preferable to parents and Lucas relies on his diary to guide him. Lucas’s peers at school will become Hollywood’s top actors in the coming decade. The ultra-quirky, stormy, funny account of an extraordinary boy’s struggle to hang onto his dream.

Jeff Lucas was a catalyst for local actors his age in Malibu in the 1970s. He is included in the Martin Sheen, Emilio Estevez autobiography, Along The Way (Free Press), and has published two stories in Rosebud Magazine, titled, Young Frankenstein and Buried In The 1980s.