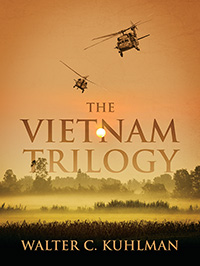 Survivor is the story of a man who survives intense combat in Vietnam but is haunted by the experience and racked with guilt, years after returning home. The war still exists within him as he goes down a precipitous path of self-destruction. The Innocents of War tells the story of the family of a soldier who is MIA (Missing in Action). Over a period of twenty-plus years, the effects of his uncertain fate plays out on each family member differently. In the end, harsh reality takes a surprising twist. Rap depicts combat veterans who have returned home from Vietnam and years later are struggling to sort out their lives. Through group therapy at the Veterans Administration, they try to make sense of readjusting from the combat zone to civilian life. For many of the men, it’s difficult. For some, it’s impossible. There is a complex tapestry woven from the characters in each play, showing how war can affect each individual emotionally, mentally, and physically. Veterans will be able to relate to the aftereffects of combat, and those who haven’t experienced it will walk away with a clearer understanding of the impact of the war experience on both the soldiers and their families. The Vietnam Trilogy presents a realistic view of the men who fought, the ones who died, and the ones who were psychologically scarred by the war.

Walter C. Kuhlman served in Vietnam with the U.S. Army in 1967–68 as a gunner on a Quad .50. He was awarded the Bronze Star w/“v” device, the Silver Service Star (in lieu of five Bronze Stars), and the Vietnamese Gallantry Cross. Like many other vets, he suffers from the affects of Agent Orange Dioxin Poisoning. Born and raised in Cincinnati, Ohio, he maintains a residence there, but spends most of his time in Pompano Beach, Florida. Mr. Kuhlman is a lifetime member of the Vietnam Veterans of America and The Disabled American Veterans. He is also a member of the Dramatist Guild.