The Unseen Paths of The Forest

13 Tales About Love and Friendship 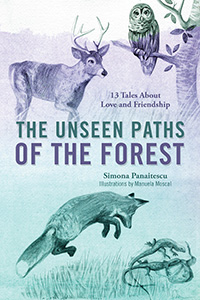 The Unseen Paths of The Forest

13 Tales About Love and Friendship

Unfolding the mysteries of the forest...

Simona Panaitescu’s collection features 13 tales of love and friendship for children. These stories are beautifully written—rich in depth, and with a poetic grace and sophistication—bringing the world of the animals who star in them to life in a wonderful way. From badgers to bears, even for the simplest animal, a life story is a love story. (A videoclip of the book here: https://www.youtube.com/watch?v=-mFTtM2orXQ&feature=youtu.be)

"With great ability, the wolf jumped, trying to catch, in two whipping bounces, the gray kitten, who had wandered away from her two brothers. The wolf always enjoyed chasing young domestic cats that were abandoned or lost at the forest’s edge. However, unexpectedly, the dry branches on which he had landed broke under him, and he found himself in a round pit as deep as he was tall. He recovered immediately, appreciating his luck, because the pit was not very deep. So he decided to jump out and follow his prey again, who couldn’t have gotten too far in just a few moments. But he didn’t have time to strain the muscles of his legs before an amazing blow got him down on the ground brutally, like a lifeless log. The next moment, the bear threw himself upon the wolf, immobilizing him with the mass of his entire bulky body. The wolf felt his body was crushed, bone by bone, by the relentless push. He whined, swallowing air, and peed like a terrified cub. At the edge of his visual field, he dimly perceived the image of the enormous head of the bear, who growled, with all his fangs naked above the wolf’s throat. He reckoned instantaneously there was no chance for him anymore ... this would surely be the end." (THE BEAR AND THE WOLF) 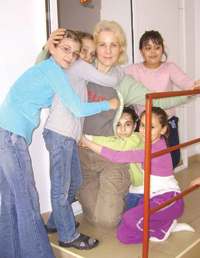 Simona Panaitescu is a psychologist who has studied mathematics, temporal logic, and psychotherapy in her native Bucharest, and she is a lifelong student of Christian spirituality. She has written four volumes of poetry and four of prose. Her collection of poetry About Greed and Longing won a debut prize from the Vinea Publishing House in 2000. She also won the debut prize of the Romanian Cultural Foundation 1999 for The Secret Mirror and the National Prize for Children’s Literature of Benefica Publishing House 2010 for the story “The Dog,” which is one of the stories featured in The Unseen Paths of the Forest .