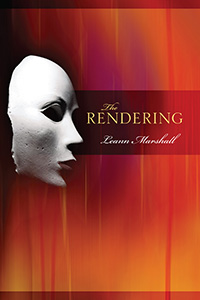 MOVE OVER SOUTHERN WRITERS, THERE'S SOMEONE NEW AMONG YOU, AND SHE'S GOOD -REALLY GOOD...

Mike Lot served twenty-nine years for murdering the one he “loved more than anything,” yet even now, Ruby has not relinquished her hold on him. Something sinister threatens her, even in death, and he will never be free of the past until he can find a way to help her. But first he must find her lost spirit. His search leads him from a backwoods dowser to a small-town P.I. to a dying young artist, and culminates in a psychic battle on the brink of hell itself.

Part mystery, part supernatural thriller, The Rendering above all is a quest driven by love that rewards both Mike and the reader with a poignant message of hope.

When they open the big door and let him out, and he steps into the sunshine and sees white, puffy clouds overhead and has to squint against the glare of puddles the rain that morning has left on the white gravel, he feels for a fleeting moment as if both of them are being set free—for he’s kept the memory of Ruby locked away inside himself for these past twenty-nine years. During that entire time he never spoke of her to anyone, and when certain thoughts of her tried to push to the surface, he forced them far away into a corner of his mind he called the Dream Safe. There they would stay until some word or some sight nudged the door to the Safe ajar, and once more memories of her would flood to the surface again.

What is it I most want now? he thinks as a tiny, rogue rain cloud scuttles across the sun. He tries to remember what came so easily to him back on the other side of the prison door. But so many years have passed since that question was a viable one—no one ever asked it of him while he was incarcerated—that it still seems somehow inappropriate. Ridiculous, even.

He stands on the shiny-wet, cracked sidewalk, but it might as well be a golden crossroads with signs pointing in all directions, his fate resting upon the answer to that one question. Then it comes to him as the sun peeks through again, washing the gray world with unbelievable color: the thought he’d awakened to every morning in the stark prison lights, even when it was still dark outside; the thought that carried him through the sameness of his routine, his chores; the thing he dreamed about every night after falling asleep to the incessant sounds in the dark—of snoring, of crying:

It doesn’t matter that she’s dead. It doesn’t even matter, God help him, that he’s the one who killed her.

The thing is, he doesn’t feel that Ruby is really gone, at least not in the sense that she’s unreachable. He feels her presence every moment of every day. Never mind that she wasn’t in her right mind at the last. Yes, there’d been the bad part of her that he hadn’t understood or even known was there, the one that blindsided him once things started rolling downhill. But he remembers the other part of her—the one she showed him first, the one he’d held and loved, the one who loved him back. And he believes she did love him; he knows it in his own soul, no matter how it seemed later. He wants, needs, to believe that.

There had been two sides to her, but it is the one he loved that calls out to him at night, that needs him. Somehow, she is in trouble. Danger. How that can be when someone is already dead, he can’t begin to fathom, but he knows all too well that there are things he doesn’t understand about the grand design of this world; most things he’ll likely never understand. And although he’s never been one to believe in something that he can’t see in front of him—God included—the feelings that wrap themselves around him and won’t let him go tell him otherwise.

What he wants most is . . . to find Ruby, whatever that means—in whatever form she might be, whichever side of her he might stumble upon. And maybe somehow, in the finding and in the helping, he can get himself back again, too.

As he stands there trying to adjust to the overwhelming feeling of having just walked out the door, tempered by disappointment at only having partly taken himself back, he realizes that Ruby long ago took his body, heart, and soul. She took him even more completely than this prison, and although he might be free again in one sense, he is not in another.

Through the dreariness and hopelessness of these last years, he lived only for her, for the few real memories of love he had allowed himself, playing them over and over in his mind like a small collection of favorite videos. Only these never became fuzzy around the edges, never wore out.

Each memory of her became precious, and so very powerful that his already compromised sanity could not handle many of them at one time. For days he would deprive himself of them. Then, when things got really bad, he would allow himself the luxury of a few carefully chosen recollections. He could select one and play it back while he went through the otherwise hollow routine of his day, could see the details in his mind as though they’d happened yesterday, and no one was the wiser.

He would remember the summer sun on her gleaming red hair, her lovely hazel eyes, the graceful curve of her shoulder. They were small things, but they had gotten him through the worst of it, those first bleak years after the conviction and later on, when he’d finally given in to the tedium and futility that filled his life inside.

She had given him something, and taken it away again. And he’d never been the same since.

For him, the very worst time had been nights after lights out, when the only sounds were the grinding snores and an occasional whimper from Harry Tucker, who cried at the drop of a hat. Everybody else had given Harry a hard time about it, but when a man’s lying in the dark, when the enormity of whatever it is he’s done hangs raw and exposed in the gloom before his eyes . . . if that alone isn’t enough to run the cold blade of despair into a man’s gut, the fact that he’s locked up in a place like the one behind him probably is. To be locked away from life has to be one of the very worst things that could ever happen to a soul. Even an animal caught in a trap would rather chew off its own foot.

Those times, at night, were when the door to the Dream Safe was weakest, when that last memory he had purposefully locked away threatened to spill out, no matter how hard he tried to concentrate on something else; dumb, empty things: a snatch of conversation he’d heard that day, the taste of a particular food, or—more irrationally—trying to will the cold, smooth bars on his cell to disintegrate. Anything to keep the door closed and bolted.

It wasn’t that he hadn’t wanted to remember anything about Ruby. The few times they’d spent together were the best ones in his life, no mistake about that. They had been so in love that when he’d held her it had hurt. He had never known anything like that existed before he’d met her. It was the troubles later on that made him ache with grief and guilt. Those were the memories that he could do nothing about as long as he was inside. As long as he was locked up, he could not afford to give himself over to it; he would die. If by some slim chance he was to get out of prison someday, he’d told himself, then he’d do what he needed to do—what his gut told him needed finishing.

Now he turns to look up at the large, unremarkable institution that has been his prison. Twenty-nine years is a big chunk out of a man’s life. He had been a model prisoner, submitting to authority, causing no real trouble, performing his duties well. The parole board had been impressed. Before he left, a few of his prison mates had even wished him well. Warden Cooke had shaken his hand good-bye.

But if they could have seen into his heart, they mightn’t have been so quick to approve his parole. That he is a murderer is true. Everyone knows he did it. But the killing, however horrible, had been a necessary thing for him to do. Maybe he’s sorry, but if he had it all to do over again, he would have to.

For the first few months of his sentence, he had gone over it many times, lying in the dark with the bones of what he had done raw and exposed in the air before him. No matter how many times he replayed it, the outcome was the same. It made him feel evil. It made him sick. But it was only the bones of it he could see, not the whole horrible beast. And even as he had pushed that awful memory away into the Dream Safe, he knew there was something else to it, something missing. Something dark and hulking and waiting to reveal itself to him so it could finish him off. Even so, he knew that if he ever got the chance he would have to see it—acknowledge it—because if he was to ever truly get himself back, if he was to ever get better, he knew he would have to.

He dares not fully open the Dream Safe just yet. Right now there are places to go and things to do. Somehow, now that he’s out—as crazy as he knows it sounds—he needs to find Ruby again. He needs to see about her.

He turns, putting the prison at his back, and heads to the bus stop to catch the number fifteen bus to the station at Fifth and Harrison. There he will buy a bus ticket for Ash Creek.

Maybe some things can never be undone, it’s true, he thinks as he walks, the uneven sidewalk feeling strange under his shoes. Still, maybe there are things he can do, things of significance. And in four hours, he will be there.

He tries to stay awake during the long ride, but the rush he felt leaving the prison has faded and now he feels drained. Eventually he gives in, and slips into a strange dream, one just as clear as a mountain stream . . .

He enters a crowded room, people standing around in twos or threes, holding drinks and talking, their muffled voices rising to the high ceiling. He brushes past them, through them, pulled to the far wall where several paintings of different sizes hang. He is drawn to one in particular. It holds his eyes with a vague glow, compels him to move toward it, to stand before it. But as he moves closer, instead of becoming easier to see it becomes more difficult, as though he is struck by dream blindness.

Frustrated, he stirs, then—mercifully, perhaps—slips even more deeply into sleep, to a place where there are no dreams at all.

Leann Marshall’s first novel, The Starfish People, won the silver medal in the Science Fiction/Fantasy category of the 12th annual Independent Publisher Book Awards, 2008 (IPPY). Her second novel, The Rendering, is now available for sale. She lives in Charlotte, North Carolina with her fiancé, John.