We Said We Do

by William and Mabel Doser 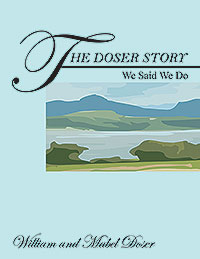 We Said We Do

by William and Mabel Doser

The North Meets the South

A young lad from Cleveland, Ohio, graduates from college, then goes south to Seminary, and receives his first appointment of three rural churches in Lincoln County, North Carolina. He meets the pianist at one of the churches. They find they have some of the same Christian and sociological values. They marry and begin serving various churches for a number of years. Later, they take a sabbatical and then retire. The husband begins to design cross stitch and needlepoint pieces for churches. They form their own company, Doser Designs. Two books are written featuring some of the designs. Clergy Stoles for Cross Stitch or Needlepoint and Church Paraments In Needlework (Both books are now out of print.) The husband had the privilege of stitching one of the squares in the United Nations Peace Rug and giving the Invocation when the Rug was presented. After thirty years of designing he retired again.. While on the sabbatical and then in retirement they traveled, making a trip to England, Scotland, and Wales with the American Needlepoint Guild. They had the privilege of meeting Princes Grace of Monaco and having a private tour of the palace. They traveled to Nova Scotia. The Dosers are both Life Members of The Order of Saint Luke and have traveled in the United States for the Council meetings and Retreats of the order. Through the years they have had their health problems but feel they have been able to overcome them. They celebrated their 53rd wedding anniversary this year.

This autobiography is the story of two people, one from the North, William Doser, the other from the South, Mabel Sigmon, telling their family background, how they met, and married. They tell of the churches that they served, then retired, then how they developed a needlework business and of their travels.