Every story in catacomb art is a tale of deliverance, a tale of the powerlessness of death and the certainty of the resurrection.

Looking back over fifteen hundred years of Christian art it appears the crucifixion of Jesus holds the highest place. We haven’t looked back far enough. Go back to the first three centuries after Jesus walked among us. Walk the dark corridors of those subterranean burial chambers of the persecuted Christians. There we find a much different theology at work: a theology with resurrection hope and power at the center. If catacomb art were all we had of Christian theology and practice from the first three centuries AD—no Scriptures—we would have no choice but to conclude that the first message of the Christian faith was the Easter Gospel. Professor Gregory Athnos has traveled to Athens, Rome, and throughout the Middle East studying the Art of the early Christians and applying his findings to early Christian practices and the New Testament. For nearly four decades he has done extensive research in the Archives of the Catacombs in Rome. Mr. Athnos has spoken on the subject of Catacomb Art and its Deliverance themes nearly 400 times across the United States, Canada, Europe, and Japan, in seminaries, colleges, churches, museums, and conference centers. His teaching has elicited enthusiastic response from both laypersons and clergy. 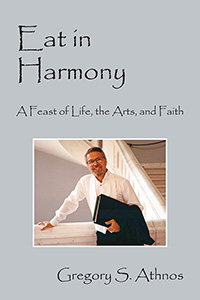