Growing Up in Japanese Occupied Philippines 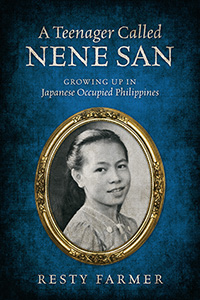 Growing Up in Japanese Occupied Philippines

Experience the Japanese occupation from the life of a Filipino teenager

This is a true story of a teenager called Nene San by the Japanese during World War II in the Philippines. She was 15 years old, a student at St. Paul’s College Catholic School for Girls and living with her grandparents in Manila when the Japanese invaded the Philippines on December 10, 1941. Originally from Concepcion, Tarlac in the Philippines, she learned to speak the Japanese language, besides her own dialect (Pampango), Tagalog (the national language) and English. She witnessed the American flyer shot down by the Japanese during a dogfight and who was brought in front of their house. It took her 42 years searching for the family of the downed American flyer. As a teenager, she was pressed into service as an interpreter during the Japanese occupation. During liberation, she also interpreted for the American forces until the end of war. Nothing can be worse than war!

Resty Vicencio Farmer is a retired nurse from Napa California. After the war, she returned to school in Manila and later went to work as a clerk typist at the Base Supply in Clark Field Air Force Base. After six months, Drake-Utah-Grove (D-U-G) inside Clark Field Air Base, hired Resty as the Company’s Librarian. It was there she met her WW II Veteran husband. Happily married, they later moved to the United States with their four daughters; one son was born in Napa, California.