Schroedinger's Universe and the Origin of the Natural Laws 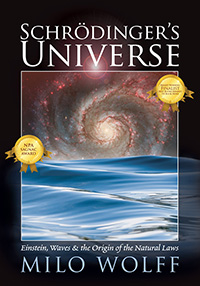 Schroedinger's Universe and the Origin of the Natural Laws

Schrödinger's Universe: Einstein, Waves and the Origin of the Natural Laws

Erwin Schrodinger (1937) perceived that the whole Universe, what we observe as material bodies and forces, are nothing but shapes and variations in the structure of space.
When he and Einstein debated the particle theorists led by Neils Bohr, most scientists thought they had lost.
This book shows they were right; that all matter is one Wave Structure in the space of the Universe. If the stars did not exist, we could not exist.

The origins of the Laws are amazingly simple – one wave medium (space), and its two properties are the only elements needed to obtain the laws of Nature that underlie all of science. This simplicity underscores the value of the book both for philosophers and for people who apply it for practical research.

Applications have appeared in industries where their bottom line is dependent on the truth of the Natural Laws; Included are the development of computer chips by Hitachi Corp. and for Intel Corp by Professor Carver Mead at the California Institute of Technology.

Milo Wolff is a retired (MIT) astronomer-physicist-engineer who has been a professor in Singapore, Indonesia, Sri-lanka, and visiting professor in China and the Observtoire de Paris. Schroedinger's Universe and the Origin of the Natural Laws is the second book describing the remarkable insights of science that arise from Irwin Schroedinger's proposal that all matter is a wave structure in space. See:www.SpaceAndMotion.com and www.QuantumMatter.com