Yuma judge sets a man free to murder his wife! A juror's story 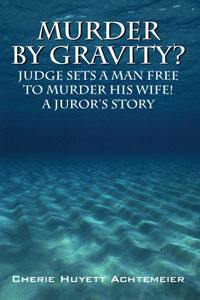 Yuma judge sets a man free to murder his wife! A juror's story

THIS TRUE CRIME MURDER HAS IT ALL!

Due to one giant judicial misstep, Richard Handcock, a violent, repetitive, criminal, and spousal abuser was sent home on an electronic monitor to murder his wife. He had learned how to manipulate the system from another inmate while incarcerated! This story draws the reader into a web of lies and infidelities, and ...

*A story of devil worship and sacrifices

*A lying informant who is framing another

*A possible drowning and

*And a botched police investigation

The living room lights were on and Hazel breathed a sigh of relief that Richard was probably home already. Inside, Richard was so angry by then, he had been stabbing the palm of his hand repeatedly with a large nail to diffuse the adrenalin that pumped mercilessly through him. The crystal methamphetamine he had smoked earlier intensified his anger. Even when the blood began to flow, it did little to stop the explosive rage that filled every fiber of his mind and body. He watched through the curtain as Hazel arrived with the other man. He stabbed himself as if he were in step with her; a blow for each of her footsteps. He imagined that she might be his hand and he wished it so, though he felt almost nothing.
When Hazel opened the door she turned around to wave to her ride that she was okay. As she closed the door of her apartment, she was spun around so quickly that she was stunned. She looked into Richard's eyes and believed just then that he might kill her. She saw the blood on his hands and shirt as he shoved her back, his hands squeezing her bicepts into the closed door. Her feet were inches off the ground. She wondered frantically if her ride had left already and her heart sank when she realized that he surely had.
Richard slowly let Hazel's body slide down until her feet were back on the carpet, and let his angry face make his case against her. He
then pushed his forearm against her throat easily pinning her again to the back of the door.
"Richard! What's wrong?" she croaked, it being difficult for her to speak.
"Who's your boyfriend, Hazel? What does he have that I don't have? A shiny, black sports car? Is that it? How long have you been sleeping with him, huh?" he spat into her face.
"What are you talking about? What 'boyfriend?' You're my boyfriend!"
"I'm not stupid, you bitch! The one you came home with just now. The one I saw you throwing yourself at in the bar tonight!"
"You've got it all wrong, Richard! It's nothing like that!" Hazel wailed.
Richard had her by the arms again squeezing her biceps hard with his strong hands. She felt her muscles crunching under his thumbs. He turned her and started pushing her backwards across the room toward the bedroom. Instinctively, she sensed that things could only get worse there. She managed to wrench herself free just long enough to make a quick side step into the bathroom and tried to slam shut the door on the only room in the apartment that had a lock on it. Richard caught the door before she could close it completely. Hazel tried with everything she had to push the door closed, but she never got close enough to latch and lock it. She pulled the bathroom's vanity drawer out that was next to the door and that suddenly stopped all of Richard's efforts. He made an animalistic growl sound in his throat and was angrier than ever. The door was open one half inch then. He could see her plastered up against the back wall of the bathroom in the vanity mirror.
He stepped back a moment and seemed to compose himself somewhat.
"Okay, Hazel. Open up! I just want to talk. I can't help what I did. It's just because I love you so much. I didn't mean to hurt you, honest!"
"Go away!" she was screaming now. She knew that her next-door neighbors were home and that just a thin wall behind the large vanity mirrors where the medicine cabinets separated their bathrooms from the other. She had often heard them talking in there. She hoped they would call the police. She opened the bathroom window and looked across the apartment building's parking lot to see if anyone beyond the alley behind it would hear her if she screamed. She saw an old man in a shop window in the backyard of a house that was backed up to the alley. Hazel screamed, "Help!" as loudly as she could. The man quickly emerged in a flood of light from the shop's open doorway, wiping his hands with a greasy rag. When she yelled again, his face turned upward and he looked right at Hazel. She knew that he had heard her cry out.
"Please help! Call the police!" she yelled as loudly as she could.
Just then, Richard managed to slide his bloody hand in between the door and the jamb and was working to get the drawer closed. Hazel charged the door just when Richard had closed the drawer enough for the door to clear it, and Hazel used the door to crush Richard's hand in the door jamb. With all his rage put into one push, the door flew open, knocking Hazel backwards again, into the bathtub where her head hit the side of it hard. She was dazed and suddenly queasy. Richard jerked her body up by her wrists until she was on her feet again only to push her backwards again, this time into the valance above the window, breaking it in half with her head. Her limp body slid down the wall . . . 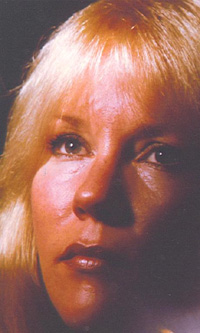 Cherie Huyett Achtemeier previously wrote columns for two newspapers in the greater Los Angeles area. While writing this book, she was diagnosed with a brain tumor and had a serious illness that caused her to suffer amnesia and other neurological dysfunctions for two years. Despite being told her brain damage was permanent, she focused her recovery so as to complete this book which was half written at the time. Happily, she has closely recovered. 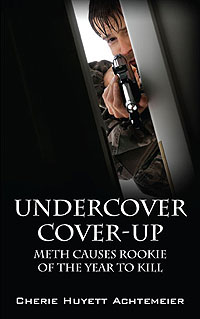