An Anthology Of Respect 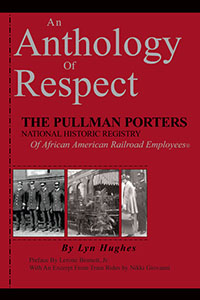 An Anthology Of Respect

This unique book with the preface written by renowned historian Lerone Bennett and excerpts from Nikki Giovanni’s poem "Train Rides", is a unique compilation with chapters that make very interesting reading. The book contains a historic registry listing of African American railroad employees who worked for the railroad from the late 1800’s - 1969; combined with chapters highlighting the origin and method used to complete the book, a glimpse inside Chicago style politics, and an in depth look at the legendary legacy of the Brotherhood of Sleeping Car Porters (BSCP) labor union. The BSCP founded by A. Philip Randolph in 1925, was the first Black labor union in America chartered under the American Federation of Labor. Click here to watch video trailer
In addition to the book being an important educative contribution to an often overlooked component of American history; it can also serve as an aid to: genealogists, historians and most importantly descendants of these men, moreover, to all who are interested in research on what has become a growing area of interest. The publication of An Anthology Of Respect: The Pullman Porters National Historic Registry of African American Railroad Employees, represents a unique scholarly contribution to the fields of African American and American Labor History.

This Anthology of Respect is a reminder of a living legacy and a clarion call to continue what A. Philip Randolph and the Brotherhood defined as "the unfinished task of emancipation." Lyn Hughes, the founder-director of Chicago's A. Philip Randolph Pullman Porter Museum, knows this story as well as anyone, and she reminds us in Anthology of Respect of a labor milestone that helped create the new world of Black and White America.

For more than a decade, Dr. Lyn Hughes a cultural activist-scholar and founder of the A. Philip Randolph Pullman Porter Museum, has generated interest in urban historic and cultural heritage preservation. She is a committed advocate for the revitalization of the Cultural and Historical Pride of the African American Community. However, her work is now being viewed at the international level as an excellent example of putting theory into practice. In 1995 she founded the A. Philip Randolph Pullman Porter Museum in Chicago Il, the first of its kind in the nation. She established this Institution as a living example and memorial to the contributions of and the participation of African Americans in the American Labor Movement. Dr. Hughes is a firm believer in the concept of life long learning. Her Dissertation research focused on the influence of cultural policy on cultural economic development.