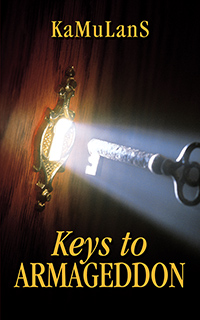 Jewels of the Bible to Prepare You for Armageddon

As faithful Christian KaMulanS delved more deeply into her lifelong dedication to the Bible, she began to have questions that no one was able to answer, particularly about Armageddon. Her need for knowledge started her on the quest that became this book, Keys to Armageddon. As a Bible picker, KaMuLanS rummaged through the scriptures, and found a collection of trinkets, numbers, and a grand calendar of events, things "in plain sight but invisible" except to one looking "outside the box." Keys to Armageddon will take you through a planned series of events from the creation of Adam to the appearance of Satan, the death of Jesus Christ, and finally Armageddon. For thousands of years, man has been battling with himself and with God. God was patient, and for the most part left man to his own demons, but in the days of Noah, God deluged the earth and man was given a fresh start. The time for another new beginning is at hand. There are just a few grains of sand left in the hourglass before Armageddon, "the war of the great day of God the Almighty." As in the days of Noah, only a few will survive. Will you be among them? Insightful and powerful, Keys to Armageddon will inspire you to seek the salvation and countless blessings that God has to offer.

KaMuLanS is an uncomplicated, simple woman who is in love with her God, her husband Paul, her small circle of friends, and her worldwide family of those who love and worship the Sovereign God of the Universe. She is a peaceful and inwardly focused individual who likes to spend quiet time alone or with her cats. She enjoys outdoor activities, not much of a hobbyist, likes to do yard work, not much of a gardener. For most of her life was very active, enjoying volleyball, walking, running, rollerblading, Country dancing, and downhill skiing. She is an avid reader, but lately her reading interest has narrowed to the Bible and Bible-related subjects. She is forever grateful to Paul, her husband of almost nineteen years, for his enduring love and companionship. They enjoy living in their old house in an old established small town in Hawaii blessed with a small circle of good friends.