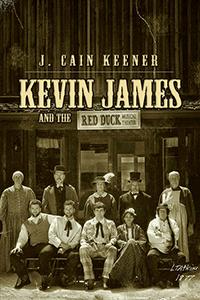 Kevin James and the Red Duck Musical Theater begins in 1806, introducing us to the odd but wealthy James Family. Third-generation Ducky James and his wife, Red, emigrate from England to Connecticut, and have a son, Kevin James, who has inherited great musical talent and incredibly fast hands. As he grows, he learns music and dance, and studies theater in New York with the famous Paris LaBlue. In 1877, hoping to pursue a musical career, Kevin must first travel to San Francisco to expand the family business. In his journey across the country, Kevin falls in love with the beautiful Charlevoix, who is also traveling to San Francisco where she will study medicine to become a doctor like her African-born father. Kevin battles outlaws and gunslingers, choreographs the unification dance at an Indian powwow, and tries to write songs and script for the musical that keeps playing in his head. Among the diverse cast of characters Kevin encounters is Pistol Lalalala, a famous Canadian female outlaw sporting a handlebar moustache; a singing dentist who can’t sing a lick; and Penny Copper, a grizzled old ranch owner who offers advice and encouragement. Kevin hires two cross-dressing Mississippi River trappers to guide him across Missouri through Indian country, and at the Chickasaw Indian powwow, he befriends a lonely powwow coordinator who joins the group heading west. In California, Kevin dreams of opening the Red Duck Musical Theater, the first musical theater in San Francisco—but first he must face an evil character from his past in order to protect his friends and save the great city of San Francisco. Kevin James and the Red Duck Musical Theater is an amusing, funny and sometimes laugh-out-loud debut novel, packed with adventure and featuring an unlikely hero who quietly teaches us all a lesson in acceptance. Quack!

About the author: J. Cain Keener is a businessman and writer. He and his wife, Nancy, live in the Blue Ridge Mountains of Virginia.