A Collection of Personal Stories From Interviews 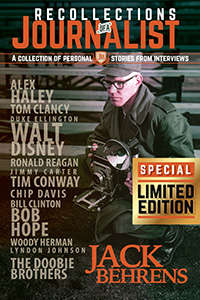 A Collection of Personal Stories From Interviews

Jack Behrens is a nationally known award-winning columnist with the Associated Press and a number of newspapers. Jack’s written 24 books including a 1976 best seller Typewriter Guerillas (Nelson Hall). He collaborated with Roots author Alex Haley on a magazine writing textbook and joined Tom Clancy and James Michener in discussions about writing in classes from the Far East to Central New York. Over his 65 years of editorial work, he wrote more than 15,000 articles for such periodicals as Harvard’s Nieman Reports, Writer’s Digest, Mankind, National Observer, Business Journal and hundreds of others. He was a correspondent for Pacific Stars & Stripes 1957-58. ... Behrens was an American history and journalism professor for 32 years at Utica College. His approach to subject matter interested a number of top professionals who visited his classes. “It isn’t to puff his head that I say his course is one of the best, one of the most effective writing classes I have seen including the highly touted classes at a couple of major universities. The reason is that John is not stressing theories about writing. It’s learning while working and self-editing. I firmly believe that had I had such a class when I started I could have saved five or more years of trial and error work,” Alex Haley Roots author suggested. The late tom Clancy who also visited Behrens’ classes, agreed. “Jack makes writing less work and more creative perspiration,” observed the Hunt for Red October writer. The reader’s Digest foundation supported the view offered by James Michener, author of the 1959 classic Hawaii, about his teaching. “John has that feeling about writing that tells others he’s one of us. It is like so many things in life; the devil is in the details.” The two men met on Okinawa where Jack was handling an assignment for Pacific Stars & Stripes and Michener was finishing his epic book about the nation’s 50th state; Hawaii. In his 24th book Jack shares interviews of some of the acquaintances he’s made with well known authors, musicians and past Presidents throughout his 65 year career. When a writer accidentally finds himself traveling alongside Walt Disney or James Michener he strikes up a conversation and takes notes. Read of Jack’s supportive relationship with Alex Haley, how he came to know Tim Conway and make acquaintance with Bob Hope. Jessica Mitford and Tom Clancy were guest speakers at Utica College. Award-winning cartoonist Bill Sanders designed Jack’s logo while they were in Korea together, John Slade and Gannett publisher Al Neuharth frequently visited Jack’s CBS-WIBX regional radio show in Utica. Appreciate Jack’s personal recollection of bandleaders Woody Herman, Vaughn Monroe, Duke Ellington, the great Doobie Brothers, the Christmas season favorite, Chip Davis and Mannheim Steam Roller, and a joyful Ringling Brothers Barnum & Bailey clown Harry Sinclair. Also included are his interviews United States Presidents Ronald Reagan, Jimmy Carter, Bill Clinton, Lyndon Johnson; and President Syngman Rhee of South Korea.