Growing Where I Was Planted 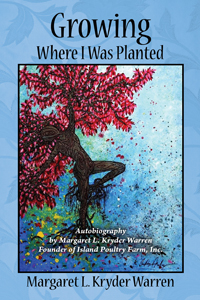 Growing Where I Was Planted

"A Woman Ahead Of Her Time"

Men, floods and naysayers couldn't stop her. Louise became an entrepreneur before it was common for women to work outside of the home, let alone in a male dominated business. At every turn, she had to reinvent herself and grow where she was planted. She became CEO,CFO,COO, and sometimes SOB while creating her chicken empire and founding the Island Poultry Farm, Inc. She started out raising chickens to sell to local farmers in the spring, and it was profitable. She found herself in a quandary when she didn’t get one call from her newspaper ad to sell her next flock of chickens in the fall. What to do with 1,000 chickens on an island with winter approaching? Sounds like the start of a bad joke, but for Louise, it was the first problem she turned into an opportunity for success. Read her fascinating, candid, and richly detailed story of challenges, heartache, and triumphs. Follow her life in the 1900s in central Pennsylvania through current day as she approaches her 100th birthday and reflects back on her long and full life. Through her many photographs and words, you will become immersed in Louise's life as you follow her footsteps from birth to finally becoming a millionaire!

Louise was born in 1916 in central Pennsylvania. She was raised on a beautiful and productive farm that sustained her, her three siblings and her parents. Louise raised two daughters and, along the way, she became an entrepreneur, owning a poultry business that became very successful over the years. At age 65, Louise sold her business, allowing her to enjoy many happy, healthy years of retirement. She now lives in Georgia and, at age 99, Louise continues to enjoy a very active and full life.