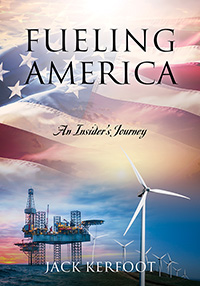 Fossil fuel was the life blood of the industrial revolution. Initially, coal was king as it fueled steam engines that revolutionized agriculture, manufacturing and the railroads. Oil surpassed coal in the 1900s with the development of the internal combustion engine, which revolutionized transportation.

America was the largest oil exporter in the world from the 1880s to the 1940s. As America prospered, our country’s thirst for oil increased. In 1950, America became a net importer of oil. By 1970, America and the world relied on the Middle East for oil.

In 1973, oil became a political weapon. An OPEC oil embargo and price hikes created global fuel shortages and economic chaos. Governments around the world responded with price controls and new energy policies. The private sector responded by intensifying the search for new oil reserves. The private sector achieved unprecedented success and by the 1980s the oil shortage turned into a glut and oil prices plunged.

My career in the energy industry began as America was coming to grips with OPEC’s dominance. My forty-year career was a roller coaster ride, taking me to small towns, bustling cities, dense jungles, deserts, and vast oceans. In my journey, I worked with wildcatters, scientists, bureaucrats, sheiks, tycoons, and potentates.

Today, oil and natural gas fuel our cars, ships and planes, power our homes and are key components in almost everything we use in our daily life. However, coal, oil and natural gas aren’t renewable resources. The global reserves of fossil fuels will be depleted in the foreseeable future. I firmly believe that America can and will find reliable, sustainable and environmentally friendly energy to replace fossil fuels, which are being rapidly depleted.

Jack Kerfoot is the principal of JL Kerfoot Energy Services. He has worked with large, multi-national and small dynamic companies across six continents. His forty year career provides him with unique insight into global energy issues. He blogs at Our Energy Conundrum at www.jackkerfoot.com