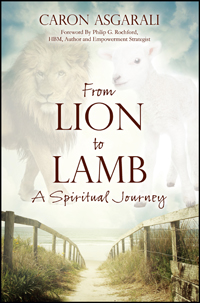 Do you want to embark on a journey, guided by the hand of God, through the labyrinth of despair to the shore of hope?

Is it your desire to emerge victorious from the stranglehold of adversity? Then walk in the footsteps of a gunshot victim and experience the austerity of physical and spiritual recuperation! In this book, From Lion to Lamb: A Spiritual Journey, you will learn lessons, influenced by the Sermon on the Mount, on • Faith and submission • Empathy and magnanimity • Hope and courage • The promise of greater glory “Caron gives her message in simple and clear terms, promoting such Universal principles as love, peace, kindness…, From Lion to Lamb is well worth reading.” — Philip G. Rochford, Author and Empowerment Strategist

Introduction Bang! Bang! The explosive reverberation brought the silence and tranquility of the evening to a sudden and definitive end. What was yet to come would be death … or life. My whole life was turned upside down on the night described before; the night I was shot in the face. This is not a story about pity though; this is a journal of spiritual growth. Through divine inspiration, I was able to discover strength in the face of adversity: a strength I would never have imagined. More than that, my walk with the Master has brought out levels of perseverance, humility and compassion that are but the tip of the iceberg when compared to all that He still has to do within me. I have been asked so many varieties of the same question: “How did you cope?” My answer is always the same as I did not cope. My God was with me, lifting me in His arms, carrying me every step of the way. The incident which changed my life On that night, Tuesday, twenty ninth (29th) January, 2013, I went for a drive with a friend. On the way home from La Romaine in South Trinidad, we pulled into a vacant lot to turn and head back in the direction from which we had come. We stopped momentarily before turning onto a main road from a minor road and the driver of my car reached for a sandwich. In a split second the tranquility of the night was blown away. It was somewhat like in the movies when the mood of the music changes to something sinister. We suddenly realized something was wrong. The driver looked to his right and saw a masked man with a massive gun; I was told this only after the incident. Simultaneously, I looked to my left and noticed a shadow. Although I did not see any weapon I somehow realized that something was wrong and instinctively moved to protect myself. There was a loud, dull noise and the car window was shattered. The driver immediately sped off. Thank goodness for the quick acceleration of my Toyota Corolla!! Now mind you I had thought a piece of lumber had been used to hit the glass. It was only as we sped off I realized that I was still hearing noises, gun shots. It was only then that I felt my face and prayed to God that what I was feeling were splinters from the window that had adhered somehow to my face. It was only when I felt something warm flowing from my chin did I confirm that I had been hit…in the face. How can I describe the myriad of feelings and thoughts in that instant? I kept thinking maybe it was nothing, but the warm, cloying blood kept reminding me that something did happen. The enormity of the damage was like an octopus – there were many tentacles with each one representing the effect of this incident on different aspects of my life. This superseded the pain of the wounds. The car sped away as if the devil himself was after us. Along the route to the hospital, I was transferred to a nearby police vehicle. They turned on the siren and sped off to the hospital with me in the back seat. I felt that we could not reach our destination quickly enough. As the vehicle proceeded with blaring sirens and flashing lights breaking the stillness of the night, I remained, I think, fully conscious and lucid. God had been with me from the onset. How else could I have escaped being shot dead at such close range with shots being fired even as we sped off? How else did I stay alive and awake even as copious amounts of blood had already been lost? When we arrived at the hospital I was unaware of the extent of the blood loss and so I walked into the emergency room where doctors and hospital workers were rushing around in a frenzy. Part of the reason for the busyness of the room was my condition. There was also a lot of activity because there were so many other shooting victims on that night. 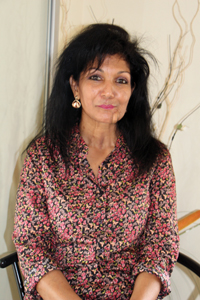 CARON R. ASGARALI is a Chemistry teacher in the Republic of Trinidad and Tobago. She was the victim of a violent crime in January, 2013 when she was shot in the face. She shares the challenges encountered and how she overcame them as a means of imbuing hope to others.