My Life as a Secret Service Agent 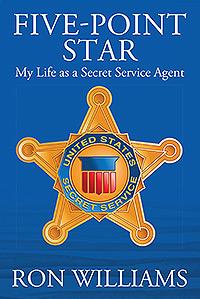 My Life as a Secret Service Agent

“Ron Williams tells it like it was back in the day. His stories bring real-life experiences to an exciting career.” ~Rick Hahn, FBI Retired

Five-Point Star tells the story of how a young man became an agent in the Secret Service, and how his experience shaped his outlook on politics and his religious faith. Two events—the murder of Julie Cross, the first female agent killed in the line of duty, and a car accident during the Queen’s visit to Yosemite, which killed three agents—haunted Ron Williams and became the impetus for writing this book. While in the Secret Service, Williams served 16 years in financial crimes, investigating credit card and identity fraud, counterfeit money, and threats against the President of the United States. He also commanded one of the first Counter Assault Teams, a counter-terrorist attack team, and considers the ten days he was assigned to Pope John Paul as the highlight of a long and storied career. Five-Point Star offers a rare glimpse into this fascinating, behind-the-scenes calling.

Ron Williams served over 22 years as a Secret Service Agent, and was awarded a Special Achievement award by the director of the Secret Service eight times. Williams is the founder of Talon Companies, which consists of three security and risk management firms that provide professional, discreet security services to companies, corporations, and government agencies.