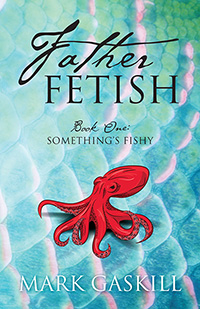 A Priest, a Murder, and a Shocking Revelation . . .

Father Anthony isn’t a perfect priest. He’s ordained in the Roman Catholic priesthood, but he’s as human as the rest of us. He smokes, he drinks, and he struggles with questions of faith. His difficulties aren’t helped by the fact that his sister has instigated a one billion dollar lawsuit against the Catholic Church. Nevertheless, he tries to do the work he’s been called to: Father Anthony is a gifted psychologist, a professor at Georgetown University and a renowned researcher and expert on sexual fetishes and bizarre human behavior. He’s famous in his field, and that’s why the DC police call on him for help when they encounter a murder with disturbing features. Father Anthony and his crew of loyal graduate students venture into the DC underworld, where their investigation uncovers a cult of murderous fetishists…but these aren’t just any degenerates; they’re powerful people, politically well-connected, wealthy, and dangerous. Something is fishy about this case, and it’s up to Father Anthony and his students to figure out what’s really going on. His skill and loyalties will be tested as he dives into a world that is fascinating, titillating, exhilarating…and sometimes deadly. Father Fetish: Something’s Fishy introduces a unique character that you’ll want to see again: the flawed, brilliant, compassionate, and curious Father Anthony, who shows us that by understanding the bizarre, we gain insight into ourselves.

Mark Gaskill has been a marriage and family therapist for more than twenty years. He has worked with hundreds of individuals and families who are dealing with a broad spectrum of sexual and behavioral challenges. Mark brings his interest in people on the fringes of society to Father Fetish, his debut novel. Mark currently lives, plays, and writes in Wyoming with his wife, family, three dogs, and several horses.