Divorce: What an Education

What You Don't Know 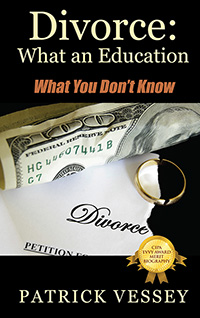 Divorce: What an Education

What You Don't Know

For those who have been mishandled, mistreated, and wronged by the judicial system of family law and divorce, this is the book for you! Based on his own experiences in family court, Patrick Vessey’s book, Divorce: What an Education, takes a hard look at the realities that often follow the marital promise of “I do.” As the child of parents who were married for forty-five years—a marriage that ended only because of the death of his father—Vessey happily married a woman and adopted her children in order to help free the family of the biological father’s influence. But his heartfelt gesture soon turned into a nightmare when he found himself no longer part of the family and yet financially responsible for his ex-wife and her children. In his book, he shares the results of dedicated research along with what he has learned from various legal battles to inform and educate others, especially men, before they venture down the path of divorce. And for those who are already in the throes of divorce, Vessey’s book offers practical advice as well as the do’s and don’ts of family law and divorce proceedings. Arm yourself with knowledge and avoid further heartache with Divorce: What an Education!

The name Patrick means noble. An individual who wanted a relationship, marriage, and children; however, it was more than he thought. So if a movie was made about his experiences, he wouldn’t need to view it because he lived it. He remains positive and moves forward through life.