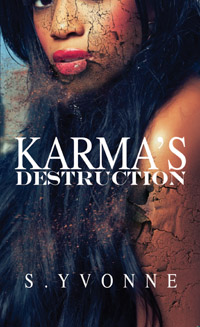 You Can't Be The Main Chick With Weak Chick Emotions And Karma Is Determined To Be The ONLY Chick In The Game Standing By Her Man.

The secrets behind her families true identity wasn't a part of the plan and neither was her falling in love with a upcoming drug dealer and when her innocent world in which she'd known it to be turns into a new life of blood, murder, and mayhem eighteen year old Karma is forced to try to find herself again. Karma attempts to flee for her life and leave everything behind but once she realizes that she's in to deep and can't run from the dangerous game of cat and mouse she realizes that her innocence is gone forever and is willing to do anything to stick by her family, even if it means joining the blood bath in the making. Karma's life is spinning out of control and she needs to find her soul again more now than ever to get through the darkness.

Sha'Laine Powell (S.Yvonne) is a freelance writer with a strong mind and passion for urban novels. Born in May of 1985 in Hawthorne California and raised in Hollywood Florida where she spent most of her childhood receiving her education she'd always known that writing was what she wanted to do. She completed her first novel "Karma's Destruction" in 2013 in which she plans to continue on and excel in the urban author field.