Memoirs of a Cold War Colonel

A Look Into An Intelligence Officer's Thirty Year Career 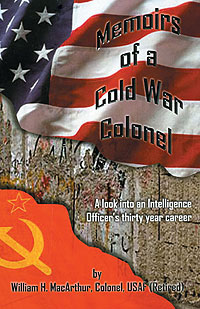 Memoirs of a Cold War Colonel

A Look Into An Intelligence Officer's Thirty Year Career

A Look Into An Intelligence Officer's Exciting Thirty Year Career.

Memoirs of a Cold War Colonel reflects a myriad of assignments and responsibilities undertaken by Col MacArthur through his thirty year career (1959-1989). He plotted and planned against our adversaries while stationed in Germany (three times), Thailand, Turkey, Alaska, and the Pentagon. These Memoirs also unveil how military family life is affected by the constant travel and pressure while military personnel are serving our nation.

When the Soviets announced they were going to close all air traffic from the West to Berlin, our conventionally loaded F-100's were ordered out of the Alert Area to the main runway and stand down there with engines off. Not long after, the order was passed for the pilots to man their aircraft, after which simultaneously all four engines roared on. It was chilling!

William MacArthur is a retired United States Air Force Colonel whose thirty year career reflected many suspenseful Intelligence assignments during America’s Cold War against the Soviet Union. "Memoirs of a Cold War Colonel" recounts his adventures in the intelligence field, ranging from supporting combat pilots about to break through the Iron Curtain to briefing the Chairman of the Joint Chiefs of Staff on very sensitive operations in Europe and Southeast Asia. The Colonel's career coincided with the rise and fall of the Berlin Wall and is an example of the dedication and sacrifices our military forces and their families displayed during that very dangerous period.