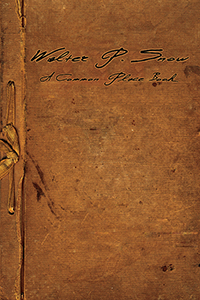 Now published for the first time.

A prominent nineteenth century ship captain and attorney, Walter P. Snow, reveals his poetic nature in this collection, transcribed for the first time from a hand-written journal. Snow's poems and essays offer us a glimpse into the life of a romantic young ship captain operating out of Maryland and Louisiana ports and aboard schooners off of Massachusetts and the Tortugas. Several of the poems address historical events, including the Dade Massacre of 1835, a pivotal event in the Seminole Wars, and battles fought during the Mexican-American Wars. His writings also shed light on life in his hometown, the small but thriving community of Snow Hill on the Eastern Shore of Maryland. “My father-land is far behind, And friends and scenes I held most dear, And all that can enchant the mind, With transient gleams of pleasure here; All, save the hope that yet the same Within thy breast is nursed the flame, As when thy fond lips pressed to mine, Confessed thy heart, my love’s own shrine.” From "Thy Voice. To Ginevra." August 20th, 1837 Baltimore

"Like bird from prison bars escaped, that seeks its native clime, Our bark with trembling swiftness flew across the whitened brine; And though I've oft seen Ocean's might when fiercest, deadliest shown, Such dread and fearful night as this I never yet have known." Excerpt from "The Fratricide", written aboard Brig Choctaw, off Nantucket Island, 1838.

Walter P. Snow’s handwritten journal was acquired and passed on to Laura K. Lawrence by her father, Feltus Kaufman. Now retired and living in Williamsburg, Virginia, Ms. Lawrence orchestrated the transcription and publication of this book with the able assistance of two transcribers, Miss Greta Berckmueller and Miss Emma Curtis. The original copy of the journal has been donated to the Special Collections Research Center, Earl Greg Swem Library, at the College of William & Mary, Williamsburg, Virginia.